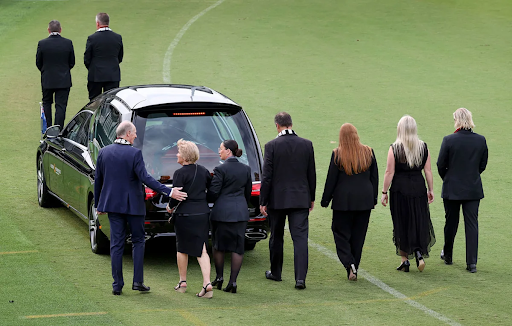 A private funeral was held in Melbourne on Sunday for the legendary former Australian leg-spinner Shane Warne, who died on March 4 due to a suspected heart attack at a resort island in Thailand’s Koh Samui where he was travelling with his friends.

A public funeral for one of the world’s most loved and successful cricketer, Warne, will be held in Melbourne on March 30 at the Melbourne Cricket Ground (MCG).

According to the Australian Associated Press (AAP), the three children of Warne, named Jackson, Brooke and Summer along with his parents Keith and Brigette as well as 80 privately invited guests were present at the private funeral on Sunday.

The list of the invitees included former Australia captains Allan Border, Mark Taylor and Michael Clarke, along with the ex England captain and a good friend of Warne, Michael Vaughan. The list of the attendees also included Australian bowling great Serve Hughes and the legendary Glenn McGrath, with whom Warne shared the dressing room and formed one of the most deadly bowling attacks in the history of Test cricket.

At the private event held on Sunday, Warne’s close friend Eddie McGuire delivered the eulogy and was also the MC for the service that was held in Moorabbin in honour of the former cricketer, who was associated with the Australian rules football club St Kilda Football Club.

The guests were also invited to wear the scarves of the St Kilda Football Club which was also draped around Warne’s coffin, which was driven around the oval on the sound of the song The Time of My Life, created by Bill Medley and Jennifer Warnes.

McGuire said during the eulogy, “To Warnie. He was simply the best.”