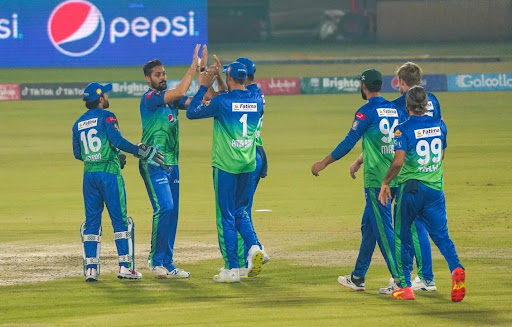 Multan Sultans won the match by 20 runs with the help of Khushdil Shah who provide a superb performance with the bowl that guided Sultans to register their fourth consecutive win in the tournament.

Islamabad United had won the toss and elected to bowl first. Sultans started the innings very well. Both their openers Rizwan and Masood were in good touch but their innings break down when Shan Masood played the straight shot and the ball directly hits the stump after touching the hand of Wasim Jr and Rizwan got run out.

Multan Sultans won the match by 20 runs with the help of Khushdil Shah who provide a superb performance with the bowl that guided Sultans to register their fourth consecutive win in the tournament.

Then, Shan Masood try to hit some boundaries, and in the 9th over de Lange sent him out to the pavilion. After the 10 overs, Sultans went on 73-2 and was in trouble.

Sultans wanted someone who provide them an amazing inning and took them out of that trouble. Then, Rilee Rossouw and Tim David took the responsibility and try to put some runs on the board.

Rossouw and David continuously hit several fine boundaries and set a great 110 runs partnership. Wasim Jr took the David wicket and provides a great breakthrough for United. In the last over of the innings, Rossouw hits three sixes to Hassan Ali.

Islamabad United didn’t start the innings very well and they lost their first wicket very early. Alex Hales try to put some show but couldn’t play long and lost his wicket on the last over of the powerplay.

United batters look rusty against pacers and lost so much ground early that they couldn’t make much of a mark against spinners either.

United continuously lost the wickets while Shadab Khan was still on the pitch and he played some sensational innings and scored 91 off 42 balls with the help of five fours and nine sixes. No other batter could score even 25 runs on the board.

United just manage to score 197 after the end of their innings and Sultan won the match by 20 runs.