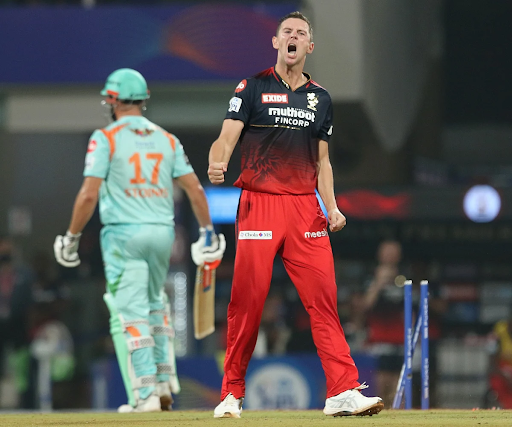 Royal Challengers Bangalore (RCB) moved to the second spot in the points table for the Indian Premier League (IPL) 2022 tournament on Tuesday night when they recorded an impressive 18-run victory over Lucknow Super Giants in the match played at the DY Patil Stadium in Navi Mumbai.

The former South Africa captain and Chennai player Faf du Plessis scored a brilliant 96 to help Royal Challengers Bangalore post a competitive total of 181/6 in their 20 overs. In their reply, Lucknow Super Giants had their troubles against the Australia fast bowler Josh Hazlewood, who took a four wicket haul to help his side record and 18 run victory.

The victory took Royal Challengers Bangalore to the second spot in the points table as they now have 10 points from seven matches with five victories and two defeats, along with a net run rate of 0.251.

On the other hand, Lucknow Super Giants were at the fifth position with four wins and three losses in seven matches that they have played so far.

Faf du Plessis scored 96 from 64 balls with the help of 11 boundaries and 2 sixes to hold the RCB innings together, as their opening batsmen Anuj Rawat was dismissed for four and former captain Virat Kohli was removed for a first-ball duck buy Sri Lanka fast bowler Dushmantha Chameera.

Du Plessis added 37 runs for the third wicket with Glenn Maxwell and was also involved in a 70-run stand for the fifth wicket with all-rounder Shahbaz Ahmed. The RCB captain also provided his side but late momentum, as, in the company of senior wicket-keeper batsman Dinesh Karthik, du Plessis added 49 runs for the sixth wicket.

Lucknow lost their opening batsman Quinton de Kock for three and middle order batsman Manish Pandey for six as they were off to a shaky start in a tricky chase at the DY Patil stadium. Lucknow captain KL Rahul did get off to a promising start but he was dismissed for 30 from 24 balls by Bangalore bowlerHarshal Patel.

Lucknow Super Giants had plenty of their batsmen making stars but they all failed to do enough to take their side past the total site to buy Royal Challengers Bangalore. Lucknow Super Giants all rounder Krunal Pandya scored 42 from 28 balls with the help of five boundaries and two sixes, but they are dependable batsmen such as Deepak Hooda (13), Ayush Badoni (13), Marcus Stoinis (24) and even Jason Holder (16) disappointed with the bat.

Royal Challengers Bangalore fast bowler Josh Hazlewood produced one of the finest performances in the tournament, returning with figures of 4-0-25-4 whereas Harshal Patel took a couple of wickets for his 47 runs from four overs. That right-arm India fast bowler Mohammed Siraj and Australian all-rounder Glenn Maxwell also took one wicket each.