Rajasthan Royals will lock horns with Chennai Super Kings in ‘Match 68’ of the 2022 Indian Premier League season at the Brabourne Stadium on Friday, 20th May. Not much will be at stake in this fixture, as while Rajasthan has all but qualified for the playoffs, barring official confirmation, Chennai has officially been eliminated from the top-four race.

Rajasthan Royals are currently placed third in the points table. They have won eight of their 13 matches and have accumulated 16 points in the process. While Sanju Samson’s men are likely to feature in the next round even if they lose this match, a win here will help them leapfrog Lucknow Super Giants to set up a Qualifier 1 showdown against Lucknow Super Giants.

On the other hand, Chennai Super Kings are placed in the ninth position, with only four wins from 13 matches. Having accumulated just 8 points so far, the four-time champions are fighting a battle of their own – to avoid the last position, which is currently occupied by Mumbai Indians.

Rajasthan Royals have rarely put a foot wrong this season and have looked among the teams to beat. After a mixed start, which saw them winning three of their first five matches, Sanju Samson’s men registered three wins on the trot.

At that stage, it seemed certain that the inaugural champions of this competition will finish in the top two, but things changed drastically when they lost three of their next four matches. The boys in pink are coming into this match on the back of a morale-boosting 24-run win over Lucknow Super Giants, and they now will aim to confirm a place in the Qualifier 1.

On the contrary, Chennai Super Kings will have to go back to the drawing board and start planning for the next season as soon as IPL 2022 concludes, for hardly anything has gone their way this season. A nightmarish start which saw them losing all of their first four matches meant that CSK were always playing the ‘catching up’ game.

Since then, however, Mahendra Singh Dhoni’s team has done well. They won four of their next seven fixtures, but have experienced a slump yet again as they will come into this fixture on the back of two consecutive defeats.

Chennai Super Kings hold the upper hand in terms of head-to-head records as they have won 15 of the 25 matches against Rajasthan Royals, whilst the team based in the pink city has won only 10 matches. Having said that, it was Rajasthan who emerged victorious in the last match between these two sides – back in October of last year. Interestingly, Rajasthan’s hero from that match, Shivam Dube is now a part of the Chennai Super Kings. 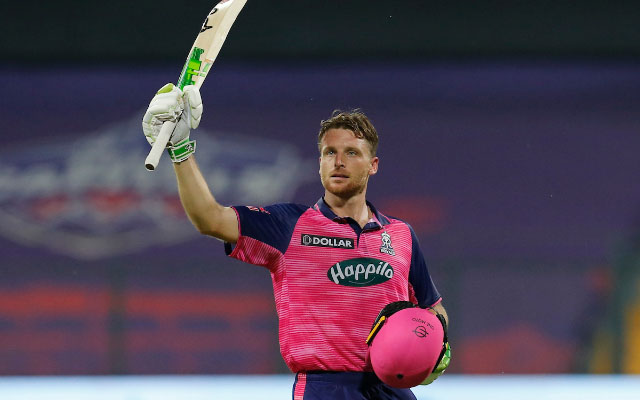 Jos Buttler has scored three centuries so far in IPL 2022

Devon Conway: The last two matches have not gone according to plans for Devon Conway, as he has scored only five runs in these two fixtures. Despite that, it has to be said that the Kiwi wicketkeeper-batter has been among consistent performers with the bat for Chennai Super Kings.

The southpaw has scored 236 runs in six matches at an average of 47.20 and a strike rate of 148.42. Conway has scored three half-centuries – against Delhi Capitals, Royal Challengers Bangalore and Sunrisers Hyderabad.

Jos Buttler: Rajasthan Royals have had spectacular performers in every single department, but if we were to name one top performer, Jos Buttler perhaps will have the edge over Yuzvendra Chahal by the slightest of margins.

He has scored 627 runs in 13 matches, and as of now, is the only player to cross the 600-run mark in IPL 2022. The Englishman has maintained an average of 52.25, a strike rate of 148.22, and has scored three centuries – against Mumbai Indians, Kolkata Knight Riders and Delhi Capitals.

Chennai Super Kings might have historically performed well in this fixture, but it will have little significance this time around, for the Royals have the edge both in terms of the overall campaign and current form. Hence, we have predicted Samson’s team to bag two points and get a place in Qualifier 1.