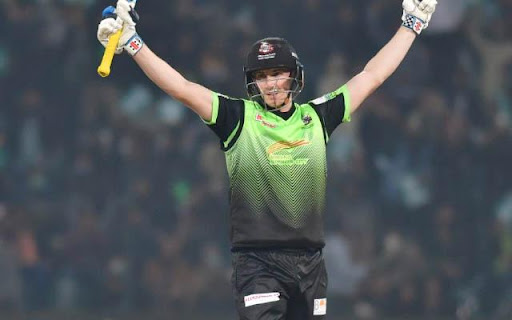 Harry Brook produced a sensational knock in the unbeaten century to help Lahore Qalandars seal a 66 run victory over Islamabad United and cement their second spot on the points table at Gadaffi Stadium Lahore on Saturday.

The 22-year-old young England batter spared none with his remarkable shots that went all over the ground and gave the jam-packed crowd a rich entertainment that was supporting him with mere passion.

Brook came to bat at a critical situation when Lahore was struggling at 12/3 and already lost Phil Salt (2), Kamran Ghulam (0), and Mohammad Hafeez (2) inside 15 balls of the match.

The right-hander then joined the leading run-scorer of the tournament Fakhar Zaman to repair the damage and both the batters put a 100 runs stand in only 63 balls to steady the ship.

Fakhar scored 51 off 41 balls followed by four boundaries and a maximum to register his sixth half-century of the campaign. The 31-year-old took his tally of tournament runs to 521 before losing his wicket to Zahir Khan.

Meanwhile, Brook completed his century off 48 balls followed by 10 boundaries and five maximums with LQ posting 197/6 in 20 overs. Faheem Ashraf picked up two early wickets and one later in the innings to make a total of 3 wickets for 28 in four overs, he was the most successful bowler for United.

United had given Rahmanullah Gurbaz a role for a quick start, the Afghanistan opener hit two fours and a six in his 20 off 11 balls before becoming a victim of Shaheen Shah Afridi. Afridi took another wicket on the next ball to put IU on the back-foot.

Liam Dawson added the contribution of 31 off 26 balls before falling to Qalandars in-form speedster Zaman Khan. United was never in the chase as they kept losing wickets at regular intervals. Danish Aziz added the crucial 30 runs but that only helped United reduce the margin of their defeat. United finished their 20 overs at 131 for nine.

Leg-spinner Rashid Khan signed off for the Qalandars for the HBL PSL 7 season with two wickets for 19 in four overs. Shaheen, Zaman, and Haris Rauf took two wickets each. Zaman, Qalandars emerging pick for the season has now taken his wickets tally for the tournament to 15.

Player of the match Harry Brook:

“It was good fun to be out there and try to post a good score for the team. I have always said that I want to be a match-winner and bat in the hardest situations. It is good fun, the crowd’s last few games have been phenomenal and it is great fun to play in front of them, these have been one of the biggest crowds I have played in front of and I have really enjoyed the experience.”