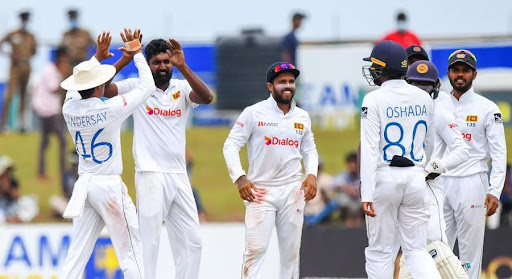 Chasing a huge target of 508 for victory, Pakistan was bowled out for 261 in the second session on day 5 with the skipper Babar Azam scoring a crucial 81 at Galle.

Spinner Prabath Jayasuriya picked up five wickets as Sri Lanka outclassed Pakistan by 246 runs in the second Test to end the series in a draw (1-1) on Thursday.

Chasing a huge target of 508 for victory, Pakistan was bowled out for 261 in the second session on day 5 with the skipper Babar Azam scoring a crucial 81 at Galle.

The 30-year-old claimed his fourth five-wicket haul in his third Test since making his debut against Australia earlier this month. Ramesh Mendis who took five wickets with his off-spin in the first innings wiped out the tail with four more wickets to celebrate the success.

In the updated Test Championship points table, Sri Lankans have moved back to the third spot with 53.33 percentage points. India is fourth with 52.08 percent while Pakistan has moved to the fifth spot with 51.85 percent.

South Africa and Australia remained in the first and second spot respectively and they will stay on course for a meeting in the final of the second cycle of the World Test Championship next year.

Someone has to put their hands up. It was my time to build partnerships so I did that. I think as a team we are playing really well. As a team, we came back strongly, much like in the Australia series. I think before we called up Prabath (Jayasuriya) we played the NSL series and I saw his potential and that’s why we brought him. Angie (Angelo Mathews) and I are playing for under-15 school days. He has matured, he always supports me. It’s a really good achievement to play 100 Tests, especially since he started as an all-rounder and now plays as a batsman.

Definitely a tough game for us. Batting wasn’t up to the mark. We were definitely in the game but Dhanajaya’s (de Silva) innings changed the game.

Prabath Jayasuriya is the player of the series:

I worked hard and I was patient. It wasn’t an easy pitch to bowl but we did well to bowl in partnerships and that led to wickets.

Dhananjaya de Silva is the player of the match:

I got a hundred after 13 odd innings, very happy with that. Had good support from my bowlers and Dimuth (Karunaratne) from the dressing room. It’s hard work (captaincy), you have to manage the bowlers and keep people motivated.