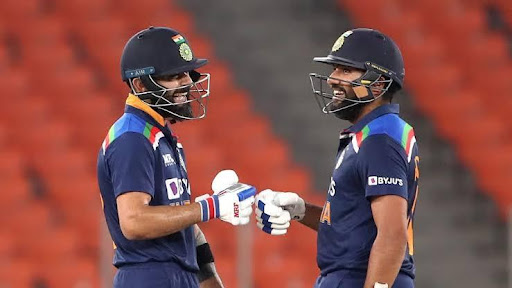 Virat Kohli had scored a digit of 1 and 11 in the T20I series against England, a long-term equation of low scores continues for the batter

For the second game in a row, Virat Kohli came to bat with an aggressive mindset. After hitting David Willey over mid-wicket for four and straight over his head for a six, he charged himself again and was caught at cover.

Virat Kohli failed once again to get into the character as he followed the same dismissal from Birmingham where he swung across the line to Richard Gleeson off the third delivery.

For the second game in a row, Virat Kohli came to bat with an aggressive mindset. After hitting David Willey over mid-wicket for four and straight over his head for a six, he charged himself again and was caught at cover.

Meanwhile, Rohit Sharma backs Virat Kohli for his new high-risk approach, losing the wicket in a more conservative style but it was the team’s new blueprint for batting.

Rohit added that Virat Kohli playing aggressively was part of his plan as well as the team’s needs and early dismissals both times were acceptable tradeoffs to check this approach.

“It’s a bit of both, you know. We, as a team, want to play in a certain way and every player needs to buy into that thought process otherwise, you know, it’s not gonna happen for you,”

Rohit said in his post-match press conference at Trent Bridge on Sunday (July 10).

“And all the batters who are part of this squad are willing to take that extra risk and go and see what extra they can do with the bat. You know, it’s important to find out within yourself, to try and do different kinds of things and unless you try it you will never be able to find out. So I think it is something that we’ve been trying to do for a while now.

“And I have said it at the press conference at the start that some days, it might just come off, some days it might not. But we don’t want to be afraid of going and taking that extra risk. That’s how we’re going to learn as a team and that’s how we’re going to move forward as a team as well. So it’s everyone’s thought process and everyone is quite comfortable with that idea as well. So yeah, that’s the kind of direction the team is willing to move.”

Kohli is adopting this new role in the middle-order as India is moving towards the T20 World Cup in less than three months. His selection in the team was also questioned by Kapil Dev, who urged the selectors to play in-form players and not go by their reputation.

Rohit responded to these criticisms and came in support of Virat Kohli, stating that the quality of the player is more important than the form.

“It’s not difficult at all for us because we don’t listen to outside noise. Also, I don’t know who these experts are and why they’re called experts. I don’t get that,”

“They are seeing from outside, they don’t know what’s happening inside the team. We have a thought process, we make the team, we debate and discuss it, and think a lot about it. The players [we pick] are backed, they are given opportunities. People on the outside don’t know about it. So it’s more important about what’s happening within our team, that’s important for me.

“Also, if you are talking about form, it goes up and down for everyone. The quality of the player doesn’t go bad. We should always keep in mind when such comments are passed around. We’re backing that quality. It’s happened with me, it’s happened with XYZ. There’s nothing new. When a player has done well so consistently, then 1-2 bad series, it [his contribution] shouldn’t be forgotten. It might take time for some to understand. But for us, inside and running the team, we know the importance. I’ll request those on the outside, yes you have all the right to talk about it, but for us, it doesn’t matter a lot.”

India lost the final T20I of the series in Nottingham but has made a streak of four straight T20I series wins over England with two wins to start.

The Indian skipper acknowledged that winning the series was a confident booster for the team and to embrace the new ideology was the biggest concern.

“The biggest takeaway has been the approach of each and every individual who has played this series. How they’ve relished the moment in the middle, taking on the opportunity, the opposition, taking that extra risk. The mindset is something we’re trying to change and that I guess is the biggest takeaway from all the players,”

“They are willing to do that, they are willing to take that risk. And when I go and talk to certain individuals or players and I hear the same kind of response from them, that is the biggest takeaway. Obviously while doing that, results will go here and there. We’re looking at the larger picture and to achieve that we’ll make some mistakes. As a captain, I’m pretty much okay with that. Honestly, to come here and win a series in England, it’s not easy. It was a challenging one for us. Winning always gives you confidence, and we can try to take that confidence and move forward and try to see how we can improve in all the departments.”