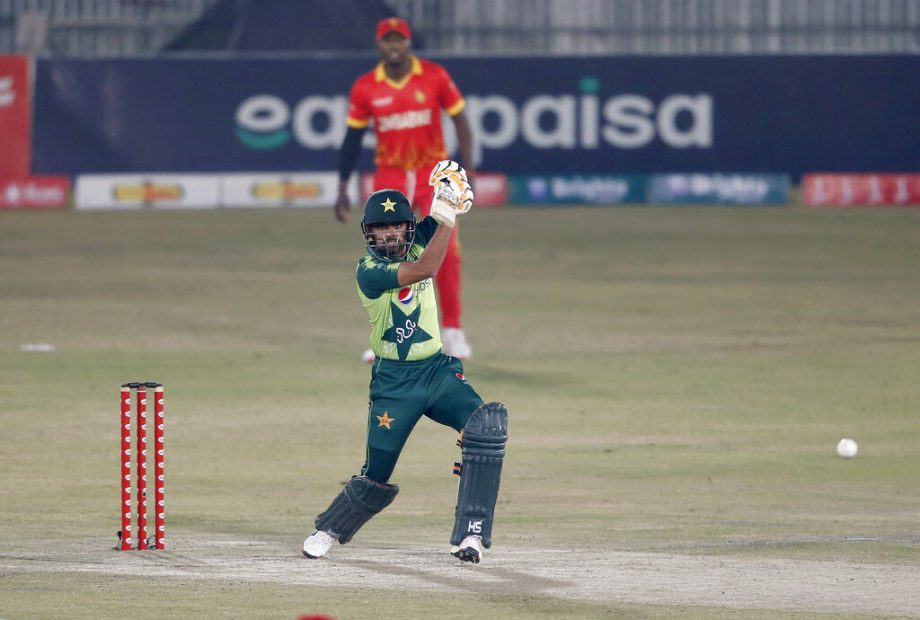 The right-handed batsman, Haider Ali helps Pakistan in winning a one-sided game. The second T20 game was held in Rawalpindi, Pakistan leads the T20 series by 2-0.

The Zimbabwe cricket team that visited Pakistan at the end of October for three ODI’s and two T20 matches, crushed badly by their host. They lost the ODI series with 2-1. They haven’t performed well in T20 series as well. Pakistan defeated Zimbabwe 2-0 in the T20 series with a match to be played yet.

The match started today in the afternoon. Pakistan won the toss and opted to ball first. Zimbabwe could not give a proper start as Brendon Taylor lost his first wicket to Haris Rauf by only scoring 3 runs. Chambhubha looked in decent touch as he hit 3 boundaries in no time. But then he knicked the ball in the air and lost his wicket to Haris Rauf.

Faheem Ashraf also gets a wicket after a long long time. He bowled Seam Williams in stumps and celebrated traditionally. Wesley Madhavere and Sikander Raza scored some decent runs and added a partnership of 27 runs until Usman Qadir came.

The young leg-spinner took two wickets in a single over and messed things up for Zimbabwe. Zimbabwe moved slowly as they lost main wickets in the first 10 overs. Ryan Burl stood for his team till the end of first innings. Zimbabwe keeps crawling until they reach a total of 134 runs in 20 overs with the loss of 7 wickets.

The leading runs scorer were Ryan Burl 32*(22) and Wesley Madhavere 24 (22) and leading wicket-takers were Usman Qadir and Haris Rauf who both took 3 wickets in their 4 overs spell.

Pakistan starts a bit slow as they score only run a ball. Fakhar Zaman loses his wicket traditionally as he gives an easy catch on mid-on. Haider Ali joins Babar Azam and they both put a great show where Babar was the class and Haider Ali was a power-hitter. They took the partnership to 93 runs when Babar Azam lost his wicket to Muzarbani by edging on the top and caught by Chigumbhura.

Khushdil Shah joins Haider Ali and they play their natural shots. Khushdil Shah hits the final boundary at the start of 16th over and finished the game. Pakistan wins quite easily by eight wickets in hand and 29 balls to spare.

The leading runs scorers were Haider Ali 66*(43) and the skipper, Babar Azam 51 (28) while defending this low target Muzarbani was the only one who took two wickets.