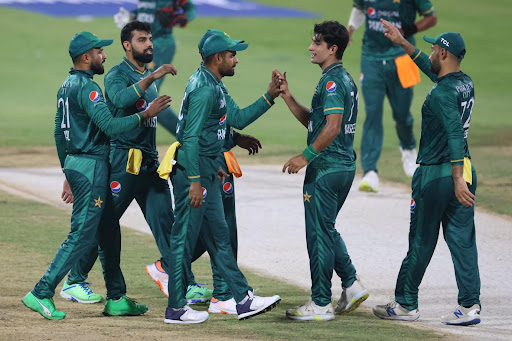 Pakistan makes into the Super 4s of the Asia Cup 2022

Defending a total of 194 in 20 overs, Pakistan outclassed Hong Kong by 155 runs and bundled out the opposition on 38 to make into the Super 4s of the Asia Cup 2022.

Naseem Shah did the trick once again for Pakistan as he got the big scalps of Nizakat Khan and Babar Hayat. Shahnawaz Dahani joined the party to get the wicket of Yasim Murtaza, leaving HK struggle at three wickets.

Later, joined Mohammad Nawaz and Shadab Khan to get themselves seven wickets to destroy the middle-order and tail and took Hong Kong to their knees for cheap.

Earlier, Pakistan suffered an early loss in Babar Azam but they covered things well enough to get themselves an above-average total of 193 for the loss of two in a knockout game against Hong Kong.

Pakistan innngs were off to a worse start as Babar Azam lost his wicket cheaply to Ehsan Khan in the third over. However, Mohamamd Rizwan and Fakhar Zaman took the innings from there and build a solid 116-run partnership and gave their side a good platform to set a bigger total.

Zaman lost his wicket on 53 by Ehsan while Rizwan remained unbeaten on 78. Khushdil Shah them played a crucial knock of 35 off just 15 balls to set the tone for Pakistan.

Mohammad Rizwan is the Player of the Match:

“Most important for us to adjust to the conditions even if it is T20 cricket. The ball was keeping low. We tried hitting, but it wasn’t coming off. Then we charged down, keeping in mind the ball was staying low. I believe in hard work… Being a senior player, you have to take responsibility. You have to play according to the team, and there will be pressure. I request everyone to help the people of Pakistan, who are in trouble [due to the floods]”

“Very nice victory for us. The wicket was keeping low, but they way we batted and finished was outstanding. We want the top-orders batters to stay till the end, and the lower ones to bat around them. The way Naseem and Dahani have debuted, they have shown brilliant performances.”

“Lots of learnings from these two games. Credit to Pakistan for the way they played. Shot making, I must admit, was poor. We’ll take back the professionalism of the two teams.”