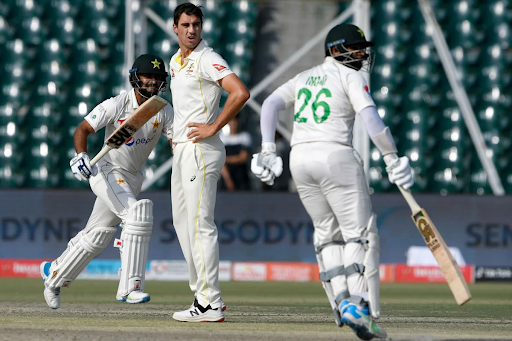 Pakistan made a strong start against Australia’s target of 351 in the third and final Test being played at the Gaddafi stadium in Lahore, reaching 73/0 at stumps on the fourth day on Thursday.

Pakistan opener Imam-ul-Haq was batting on 42 not out in the company of Abdullah Shafique who was on 27 not out as the home team batsmen kept Australia waiting for their first breakthrough in the final session.

Australia, who resumed their second innings at 11/0on the fourth day, finished at 227/3 declared with Usman Khawaja scoring his second century of the series and continuing his rich form with the bat. The left-handed Australia opening batsman Khawaja eventually finished with 496 runs from three matches at an average of 165.33 in the series, getting 2 centuries and as many half-centuries which included scores of 97 and 91, with the latter coming in the first innings of the third Test.

On Thursday, Khawaja remained unbeaten on 104 which came from 178 balls including eight boundaries when the Australian captain Pat Cummins declared the innings. At the other end was the left-handed middle-order batsman Travis Head, who reached 11 not out from 7 balls having hit one six and a four.

Australia No 3 batsman Marnus Labuschagne scored 36 from 58 balls with the help of six boundaries whereas Steve Smith was dismissed for 17 from 27 balls. Smith created a world record in his short innings on Thursday as he went past the 8,000-run mark in only his 85th Test, taking a mere 151 innings to achieve the feat.

For Pakistan, both their fast bowler Shaheen Shah Afridi and Naseem Shah took one wicket each whereas left-arm senior spinner Nauman Ali took 1/55 from his 10 overs.

Apart from a brilliant hundred from Khawaja, Australia were bolstered with a superb half-century by their other opening batsman David Warner, who made 51 from 91 balls with the help of six boundaries and 1 six.

With the pitch breaking down and keeping low on most of the times for spin bowlers, Australia thought a total lead of 350 would be enough to set as a target for the Pakistani batsmen.

But both Imam-ul-Haq and Shafique batted brilliantly against the Australian bowlers in the final hours of the third day, keeping their team in hunt of a victory which would be historic if achieved.

On the final day with 90 overs to be bowled, Pakistan need another 278 runs to win and clinch the series since both the previous two Tests of the bilateral affair had finished in disappointing draws.

However, the task would be tough to a large extent since Pakistan are prone to embarrassing batting collapses, having suffered one in the first innings of this Test wherein they lost 8/54 to be bowled out for 268 in reply to Australia’s total of 391.

Ramiz Raja uses a bulletproof vehicle due to a security