Odean Smith: Punjab Kings haven’t won the title so far but we just need to have belief  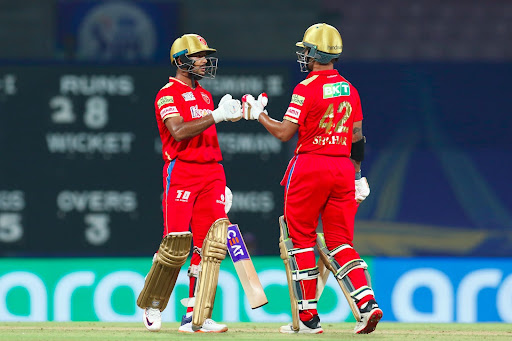 Punjab Kings started their 2022 Indian Premier League campaign with a win over Royal Challengers Bangalore in the season opener for both the teams with new skippers.

RCB started their innings on a good note as IPL debutant Anuj Rawat was collecting quick runs from one end while new skipper Faf du Plessis was struggling for runs during the powerplay overs.

After Rawat’s dismissal for a score of 21 runs, a 118-run partnership between skipper du Plessis and Virat Kohli ensued which saw the former Proteas skipper scoring 88 runs off 57 balls managing three boundaries and smashing seven maximums.

A fine 32-run cameo from Dinesh Karthik towards the end helped the Royal Challengers cross the 200-run mark and set a challenging target for Mayank Agarwal’s men on a batting-friendly pitch.

Chasing a tricky target of 206 runs, Punjab’s opening batsmen Shikhar Dhawan and skipper Agarwal never looked in doubt as their 71-run partnership in 7 overs set a good platform for the middle-order batsmen.

Bhanuka Rajapaksa smashed 43 runs off 22 balls giving the run-rate a serious lift which allowed Shahrukh Khan and Odean Smith to stitch a match-winning partnership at the business end of the match.

At the post-match presentation, ‘Man of the Match’ Smith explained the team’s positive mindset after the win in the season opener despite not winning the prestigious title since the tournament’s inception.

“We were stressing about having a good start. We just needed to have that belief. Didn’t go so well with the bowling. I need to work on a few things. Batting was good as I helped my team to win. It was all about execution and I couldn’t and that’s why it went haywire. Punjab (Kings) hasn’t won the title so far but we need to have the belief. We watched ’14 peaks’, 13 remain for us.”

Losing skipper du Plessis discussed what went wrong for his team on the night and how Smith took the match away from them after a dropped catch.

“The catches towards the end… Odean Smith 25 off 8 balls. I think we probably dropped him on 10. After that, we are looking at some tailenders coming in. The cliche of catches wins watches. There was a bit of dew out there, a tough night for the bowlers, but I thought they were pretty decent with the wet ball. Small margins, but they chased it down really well.”

“They had a really good powerplay. The ball skidded on a bit more in the second innings and then we pulled it back beautifully. We did a lot of good things in the middle. But you know what Odean Smith can do to you. So you got to hold on to those chances. Even the other guy, Shahrukh Khan, didn’t really nail it tonight until the last couple of balls. So completely different game if you hold on to those chances.”

Winning skipper Agarwal praised his side for the way they chased down the huge target but maintained that the side is not going to panic in situations like these.He said,

“Two points for us is very important. Good wicket. Very good wicket as both sides scored 200 plus. One or two balls held up but nothing apart from that. Credit to the way we finished. We took the right chances and am glad it came off. I think we gave them 15-20 more. Virat and Faf took the game away from us but credit to our batters to chase this down. We trust our skills. It doesn’t come off, it doesn’t come off but we are not going to panic and make a scene out of it..”