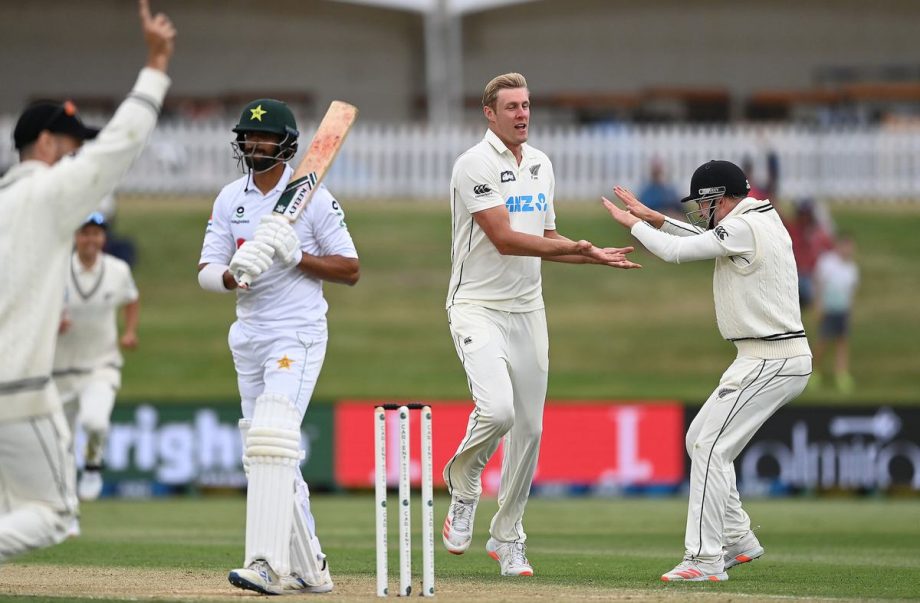 NZ vs PAK, 1ST Test: New Zealand ends the first innings on 431 runs, Kane Williamson (129) was the highest run-scorer from his side. Kyle Jamieson strikes early as Pakistan struggles on 30/1 at the end of stumps, day 2.

New Zealand was remarkable with the bat in the first innings as they scored a fine 431 on a green and seaming wicket, Kane Williamson (129) scored the highest runs from his side. Kyle Jamieson strikes early as Pakistan trembles on 30/1 at the end of stumps, day 2 at Mount Maunganui on Sunday.

Abid Ali was the opener along with the night-watchman Abbas to tackle some balls before the end of the day, after Kyle Jamieson removed the left-hand opener, Shan Masood, on 10. The wicket at Bay Oval, Mount Maunganui is famous for bowling on the first and last day of the Test match, also Kane Williamson’s home wicket.

Williamson said that the wicket is already showing signs for spin bowling in the middle stage overs but New Zealand depends on the short ball specialist, Neil Wagner to strike in the middle overs.

“Hopefully the cracks start to open and hopefully it starts to deteriorate. Spin will come more into play. There are bits of rough as well so I’ve no doubt spin will have a role,”

The major concern of New Zealand was their left-hand pacer, Neil Wagner who was being hit by a Yorker by Shaheen Afridi early today while batting, who would have a scan at the end of the day.

Wagner managed to stay for three overs when Pakistan was batting but he was clearly in pain.

New Zealand started the 2nd day with a strong grip on 222/3, added further 209 before Wagner was the last man to play for New Zealand.

Kane Williamson proved his class once again and he showed the world why he is among the top batsman in all formats of the game. He described his innings as really satisfying after Pakistan won the toss and sent New Zealand to bat on the fresh, green and seaming wicket. Williamson stood firm against the Pakistan tough bowling attack of Shaheen Afridi and Muhammad Abbas on day 1.

Although, there was no movement on day 2 and the pitch was dry and useful for the spinners as a result Pakistan spinner scalped three wickets including the significant wicket of the skipper, Williamson.

Henry Nicholls stood alongside Williamson, made a 133 run partnership for the fourth-wicket, was the first one to depart bizarrely when he should have stood in the field to improve his case.

He was given out after being hit on the gloves, he consulted Williamson for the review but he could convince him and later the replay showed that the ball clipped his forearm and neither his glove nor the bat.

Williamson scored the slowest century in his Test career due to the tough bowling by Pakistan pacers but after completing the milestone he moved forward with pace to 129 with the addition of only 36 deliveries.

Yasir Shah was introduced to throw some magic and did that, Williamson nicked a thin edge on his third ball of the over, caught brilliantly by Haris Sohail in the slip position.

Tim Southee lost the wicket on duck after playing nine balls, Watling nicked to Yasir Shah at the gully, bowled by Shaheen Afridi.

It was a productive day for the leg-spinner, Yasir Shah who took three wickets for 113 runs while Shaheen Afridi took four wickets 109 runs.