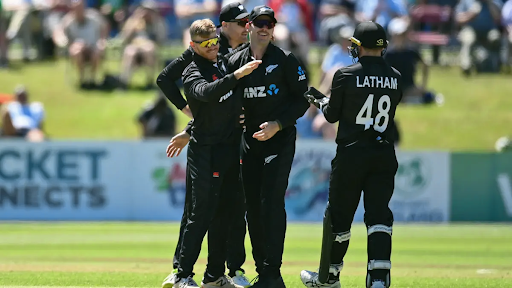 The Blackcaps take it all!

A nail-biting One-Day International saga between hosts Ireland and visitors New Zealand comes to an end. As the Blackcaps returned to their motherland after whitewashing the 50-over series by 3-0 despite a great fightback by the Irish Army. Hence let’s take a look at the player ratings and detailed performances report of Team New Zealand from this series. 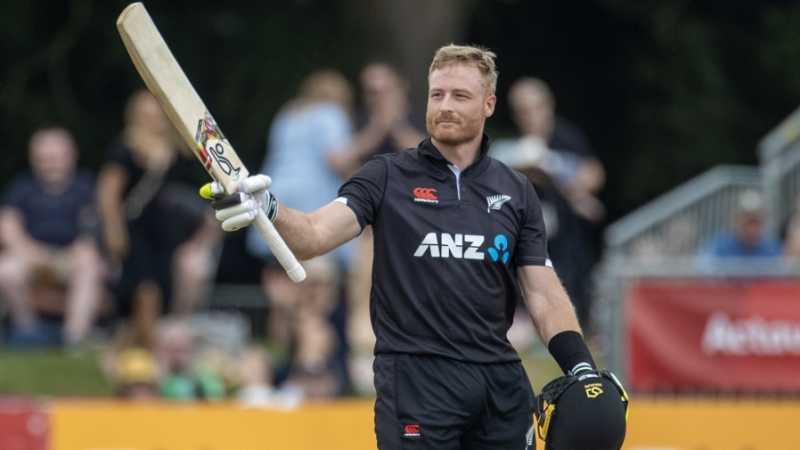 The big man left no stone unturned against the Greens

Martin Guptill (8/10): The veteran Kiwi opener kick-started the ODI series with a sturdy 51-run stand in the opening ODI where wickets were falling continuously from the other end but he stood tall for his team before giving up on Curtis Campher’s delivery of the 22nd over. After getting dismissed on the first ball of the innings in the second game, Guptill quickly recovered himself and delivered a banging performance in the final 50-over fixture.

Guptill scored a marvelous century while batting first in the third ODI scoring 115 runs off 126 balls. His hundred-run stand set a robust base for the Kiwi batting unit to build a humongous total of 360 after completion of the 50 overs. The Two Toes batter led the Kiwi batting unit scoring a total tally of 166 runs from three innings with an astonishing average of 55.33.

Finn Allen (5/10): The limited-over specialist youngster was given the nod ahead of Henry Nicholls to open the Kiwi innings in this series. The 23-year-old batter emerged as the highest scorer of their chase in the second game but failed in the other two innings of his debut ODI campaign. Allen will be seen once again opening the New Zealand innings due to the absence of Henry Nicholls in the Scotland tour where they will be playing a one-off 50-over game.

Will Young (1/10): It was a disastrous campaign for the 29-year-old Central District product who is still getting his feet in International cricket. He could score just four runs in three innings of the series including a golden duck in the second ODI which put the NZ side 0/2 down in the second ball of the game. Young batted in Number 3 position which is considered to be very crucial in 50-over format hence his flop show will leave a dark stain on his contention in near future.

Tom Latham (6/10): He was handed over the responsibility of leading the ODI side against Ireland by New Zealand Cricket as the regular skipper Kane Williamson was rested. And the 30-year-old wicket-keeping batter has done an exceptional job by registering a clean-sweep triumph in his maiden full-fledged 50-over captaincy assignment.

Latham got good starts in every game but couldn’t convert them into the big ones and crossed the 50+ mark only once, in the second ODI where he came out to bat in the third ball of the innings as the Irish speedster Mark Adair dismissed Martin Guptill and Will Young on the first two deliveries of the opening over. The skipper fought hard to get closure to the target scoring 55 runs from 73 balls and only dropped the weapons when they were 43 runs away from the target.

Henry Nicholls (6/10): Nicholls received a demotion down the order as his opening slot was given to the debutant Finn Allen for this series. He was the opening partner of Martin Guptill for a long time hence it took him a while to adjust to the new role but soon he found the edge. The star Canterbury batter played fierce innings of 79 runs from 54 balls cracking the strike rate of 146.30 to direct the Blackcaps innings to a humongous total of 360.

Glenn Phillips (7/10): Another debutant who delivered a promising performance in his maiden One-day International campaign for New Zealand. The 25-year-old all-rounder played a robust knock of 38 in his debut game which was followed by a quickfire 47 runs cameo in 30 balls where he missed his maiden ODI half-century by just three runs. Phillips also proved himself to be worthy with the ball by picking two wickets in his breakthrough international campaign. 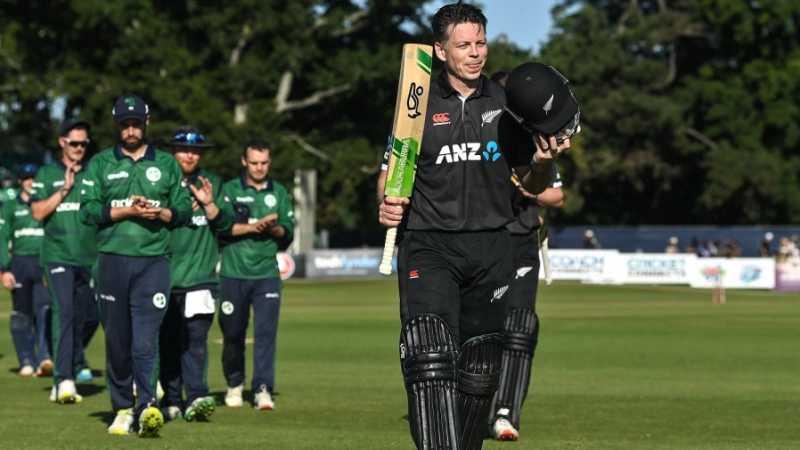 The next big thing for New Zealand cricket

Michael Bracewell (10/10): The latest flag-bearer of the Bracewell dynasty in International cricket has been the find of the series for New Zealand and emerged as the saviour after rescuing them from crisis multiple times. Bracewell was the highest run-scorer from the Kiwi’s camp with 190 runs under his helm while the Irish bowling attack couldn’t even get him out once throughout the series.

In the opening fixture, New Zealand needed 20 runs from the final over having left only one wicket in hand when Bracewell pulled off a miracle scoring 24 runs sparing one ball to finish it in style. An incredible 127-run knock with a strike rate of 154.88 was followed by another Player of the Match performance where he scored unbeaten 42 runs and picked two wickets with an economy rate of 2.6 from 10 overs. The dream series was consummated by him scoring a quickfire 21 of 16 balls and eventually bagging Player of the Series honour.

Ish Sodhi (8/10): The kiwi frontline spinner played only a single game in this series as the team management had thought to give him rest when the competition got easy onwards. In that game, Sodhi picked two wickets of Irish lower-order batters Lorcan Tucker and Mark Adair in death overs to register the bowling of 2/62 after consummating 10 overs quota and also scored 25 runs with the bat. New Zealand was six wickets down on the score of 153 runs when came out to bat and had a crucial 61-run partnership with Michael Bracewell for the sixth wicket.

Mitchell Santner (7/10): Santner replaced Ish Sodhi in the Kiwi playing XI from the second ODI onwards. He was the second highest wicket-taker of the series with 5 wickets from just two games and that too with a frugal economy rate of just 5.15 throughout the series.

Lockie Ferguson (6/10): The limited-overs tour in Ireland has fared moderately for the Kiwi speedster till now. Ferguson had a great individual outing from the opening fixture where he delivered a bowling performance of 2/44 dismissing the big fishes Paul Sterling and Andy McBrine. He was then handed over a one-game rest and returned for the third ODI but remained wicketless in the final fixture of the series.

Matt Henry (8/10): Henry topped the wicket charts of the ODI campaign, fetching seven wickets from three appearances and giving breakthroughs on a regular basis. In the second ODI, he struck Paul Sterling’s wicket in the very first over of the game and once again picked the wicket of the opponent’s skipper during the fifth over of the innings.

The Kiwi speed-gun then went on to attain four wickets in the third ODI and played a pivotal role in their one-run victory. He trapped the Irish top-order by dispatching the first three Green betters back to the pavilion and also dismissed the danger-man George Dockrell in the penultimate over of the game.

Blair Tickner (7/10): The 28-year-old pacer who made his ODI debut earlier this year against the Netherlands is having a fine run in the 50-over setup of the Blackcaps. Tickner picked three wickets in the series including the dismissal of Centurian Harry Tector although his economy rate remained quite high consistently. He had only 10 runs to defend in the final over of the third fixture and he went on to win it for New Zealand by giving away just eight from it. Jacob Duffey (6/10): The 27-year-old Otago pacer received his debut ODI cap in the second game replacing Lockie Ferguson in the attack. Duffey went on to put full-stop on George Dockrell’s fightback innings as his maiden International wicket and also had a fair contribution to Simi Singh’s run-out. In the turn of events, Ferguson returned to the Playing Eleven for the final game as Duffey had to make way for his teammate.