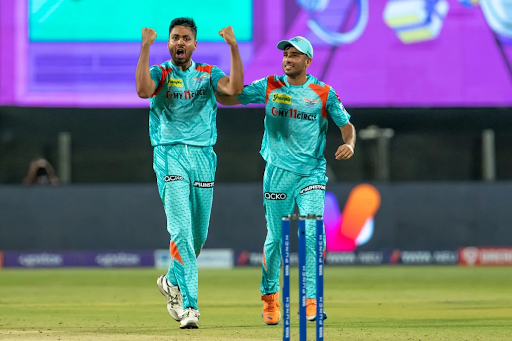 Lucknow Super Giants bowled out Kolkata Knight Riders 4101 in reply to their first things total of 176/7, which was powered by half-century from Quinton de Kock and valuable contributions coming from the likes of Deepak Hooda (41), Krunal Pandya (25), Ayush Badoni’s 15 not out, Marcus Stoinis (28) and 13 from Jason Holder.

Lucknow Super Giants lost their captain KL Rahul in an unfortunate manner early on when he was run out for a duck without facing a ball but they recovered well, thanks to a strong 71-run stand between wicketkeeper-batsman Quinton de Kock and Deepak Hooda, who played their parts really well.

Quinton de Kock was aggressive in his innings as he smacked 3 sixes and 4 fours to make 50 from 29 balls, whereas Deepak Hooda cracked 4 fours and 2 sixes to make 41 from only 27 balls.

KKR all-rounder Andre Russell was instrumental in making further inroads into the LSG batting ranks, removing Deepak Hooda and Krunal Pandya to keep his side in the game. However, KKR just did not imply enough pressure with the ball as plenty of Lucknow Super Giants’ batsmen made vital contributions to the team’s cause on Saturday night.

Andre Russell was impressive with the ball as he returned with 3-0-22-2 while the others in Tim Southee, Shivam Mavi and Sunil Narine took one wicket each for their side.

KKR were poor with the bat as their top order collapsed without making a mark. Baba Indrajith was out for 0 from 6 balls, Aaron Finch perished after making 14 from as many balls, Shreyas Iyer could score only 6, while the dependable Nitish Rana (6) and Rinku Singh (2) also flopped with the bat.

Andre Russell tried to take the attack to the opposition as he hit 5 sixes and 3 fours to make 45 from only 19 balls, but his innings and a rapid 22 from Sunil Narine were the only contributions worth mentioning in the KKR ranks.

Kolkata Knight Riders were bowled out for 101 in 14.3 overs with Avesh Khan taking 3/19 from his 3 overs, Jason Holder taking 3/21 from 2.3 overs and the likes of Mohsin Khan, Dushmantha Chameera and Ravi Bishnoi getting one wicket each.