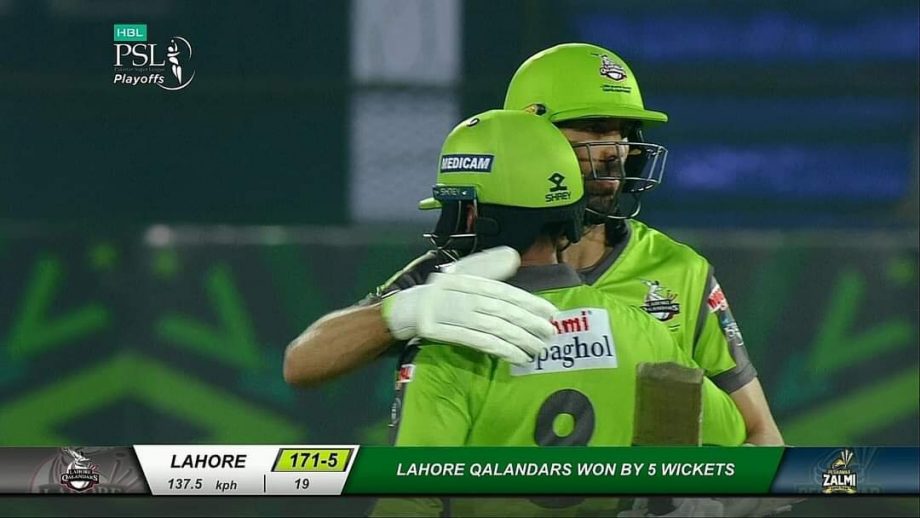 Lahore Qalandars keep entertaining the fans and viewers after winning a thriller with 5 wickets in hand and an over to spare. LQ will play the semi-final with Multan Sultan on Sunday.

Lahore Qalandar faced Peshawar Zalmi in the Eliminator 1 round today. Both the teams did some real home-work as it was a knock-out game. The loser will say good-bye to the PSL for now so every little move mattered.

Professor along with David Wiese steals the victory and 5 wickets in hand and an over to spare. Muhammad Hafeez was the lead runs scorer 74*(46) and his professional innings was the back-bone behind Lahore’s win.

Fakhar Zaman started nice along with Tamim Iqbal in the first over but he could not go further and knicked behind with an easy catch to Imam-Ul Haq, the substitute wicket-keeper. Tamim Iqbal hit some boundaries but he also departed after edging on the top of his bat. Sohail Akhtar and Hafeez took the innings from there.

The skipper, Sohail could also not stand long as Wahab Riaz caught him easily. The chewing-gum man, Ben Dunk came to the crease to support professor. They build an important 50 runs partnership and kept the scoreboard moving. Ben Dunk lost his wicket in the 12th over to the youngster, Muhammad Irfan. Samit Patel then joined professor in adding some useful runs in the chase until they require 41 runs in 4 overs. Rahat Ali took his wicket and bring some life back in Peshawar’s bowling.

The giant, David Weise joined Hafeez and both of them hit some fine shots while getting close to the target. Wiese steals the victory in the last ball of 19th over and LQ won the match easily.

Earlier, LQ won the toss and elected to ball first. Shaheen Afridi strikes on the second ball and took the important wicket of Haider Ali. Faf Du Plessis was playing the debut match for PZ and PSL, he started well and hit some boundaries but then he knicked behind to Ben Dunk. Shoaib Malik and Hardus Viljoen added the most important runs to reach a total of 170 runs.