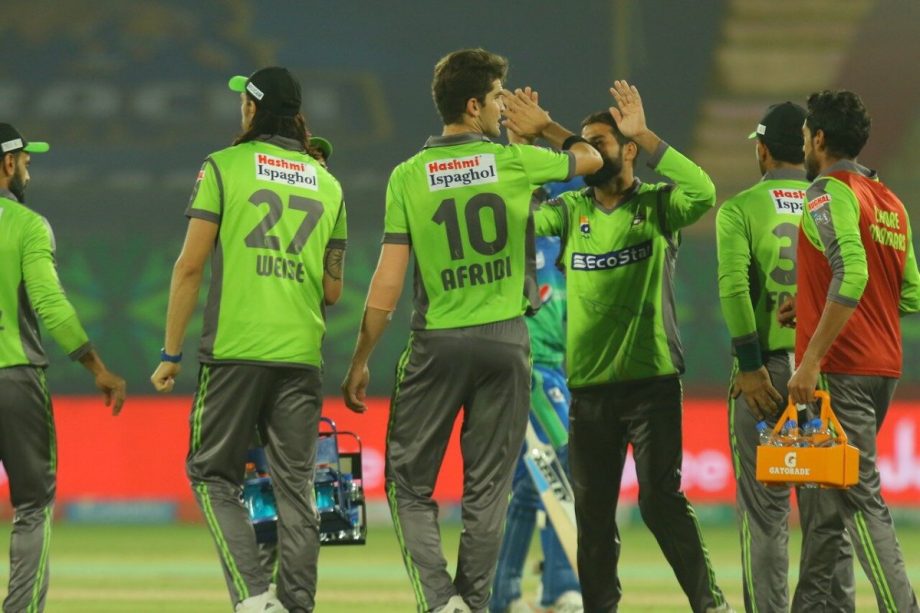 LQ Vs MS, PSL 5, Eliminator2: Qalandars finally getting tickets for the final after bowling out Multan Sultan on 157 runs.

Things turned out good for Qalandars, finally. After a strong romance of LQ with the bottom of table for 4 consecutive years, LQ have managed to win a place in the final with Karachi Kings on Tuesday.

Lahore owned the victory or David Wiese, whose blistering 48*(21) runs and three major break-throughs in 4 overs helped Qalandars in managing an easy win against Multan. The 35-year African giant, put a major role in achieving the target of 182 runs or it would have been a mediocre target.

He also broke the back-bone of MS in the middle order when they were in a strong position to chase the target. The result is pretty much the same as everyone wanted, it’s a blockbuster between Karachi Kings and Lahore Qalandars on Tuesday.

Multan Sultans were given a gigantic run-chase of 183 but they set up an ideal start. Adam Lyth and Zeeshan Ashraf started well with minimum 2 boundaries an over. Shaheen Afridi, the new-ball expert was also not spared and the left hander’s specialist, Hafeez could also not do well.

Boundaries were raining everywhere. They managed to score 47 runs in 4 overs with a powerful strike by Adam Lyth. Qalandars finally got a break-through in 5th over when Haris Rauf bowled a decent pacer. It was Zeeshan Ashraf who knicked behind.

The skipper, Shan Masood joined Lyth and they kept striking until 9th over when Wiese took the important wicket of Lyth. Rilee Russouw and Masood kept the scoreboard moving. After 2 overs, Shan Masood nicked the ball in air to Dilbar Hussain and Multan trembled. In the 13th over, Multan lost another wicket, and this time it was Ravi Bopara who lost his nerve to Wiese.

Wiese strikes in the same over and took the important wicket of Rilee Russouw who could turn the match in no time. Afridi came into strike on next over and Haris Rauf bowled him with a bullet in-swinging yorker. He apologized to Lala as a gesture of respect. It was difficult for Multan to win from that position as Lahori pacers created a mess in their line-up.

Khushdil Shah gives a little hope to Multan after being caught on a no-ball. He hit some boundaries and put some life back in Multan but he could not do much as Dilbar strikes in the 17th over. The last hope for Multan was also gone. Multan kept losing wickets until the 19th over when they were bowled out on 157 runs.

Earlier today, Multan won the toss and opted to ball first but the decision did not prove well as Lahore did quite well in power-play. Tamim Iqbal and Fakhar Zaman opened the innings with some fine cricketing shots. Tamim entertained the fans with his traditional drives and pulls. He scored 30 (20) and dismissed the same as the previous match but the bowler was Junaid Khan.

The skipper, Sohail Akhtar comes next but he loses the wicket in next over after flicking the ball in the hands of the fielder. Hafeez partnered with Fakhar Zaman led the score to 94 in 12 overs.

Hafeez was not looking in control as he lofted to Shahid Afridi and caught at long off. Fakhar after hitting 2 boundaries in the next over loses the wicket to Adam Lyth. Shahid Afridi bowls out Ben Dunk in the next over with a nice off-spinner. David Wiese and Sumit Patel played some outstanding shots and they moved the scorecard speedily.

Wiese hit two gigantic sixes in the last two balls and finished the innings in style. The extra 20 runs that he added in his side proved very beneficial and that was a match changing moment.