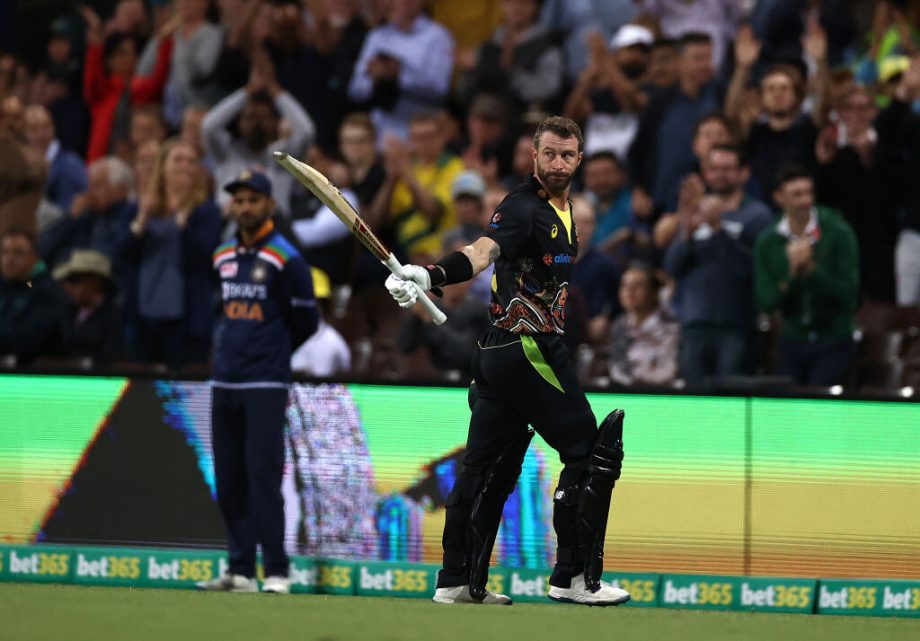 India vs Australia, 3rd T20: Virat Kohli’s half-century fell short as Mathew Wade, and Glenn Maxwell saved Australia from white-wash in a nail-biter. India’s streak of 10 consecutive wins in T20I’s came to an end after losing the final T20 game from Australia by 12 runs at SCG.

Virat Kohli smashed a blistering 85 runs in the second inning. Still, it fell short as no one stood with him, and Mathew Wade and Glenn Maxwell’s half-centuries dominated along with the stunning bowling performance from Mitchell Swepson 3/23, which helped Australia win the last T20 by 12 runs at SCG.

The host, Australia, saved itself from white-wash after winding-up the T20 series by 1-2. Mathew Wade smashed a thrilling 80 (53) with Maxwell’s support, who scored 54 (36) after a few drop chances. They set up a huge 187 runs target for India, but no batsman stood with the captain, Kohli, who single-handedly scored 85 (61), but it wasn’t enough to chase down the total. Mitchell Swepson bowled a match-winning spell of 3/23 in 4 overs, and Australia won the nail-biter in the final over.

This defeat costed more than a loss to India as it put a stop to their ten consecutive T20I wins in the International format. It also ended India’s hope of registering a 100% T20I win in the calendar year.

Earlier today, India started quite well after Washington Sundar removed Aaron Finch in the second over. Mathew Wade picked from there and scored freely along with Steve Smith. Steve Smith could not go long as he lost the wicket in the 10th over. The in-form Maxwell joined Wade form there.

Indians were very poor in the field today as they lost two catches of Maxwell; Maxwell took every benefit of it and smashed all over the ground until T. Natarajan bowled him in the final over. India posted 186/5 in 20 overs.

India gave a strong comeback with KL Rahul hitting straight to long-on off the second ball of Glenn Maxwell.

Virat Kohli almost lost life, but Steve Smith lost an easy catch, giving him a second chance. Kohli does not give many chances, but he was dropped again by Andrew Tye off his bowling, gave him two opportunities for which he scored a 25th T20I half-century. India lost Shikhar Dhawan, Sanju Samson, and Shreyas Iyer in a short time to legspinner Mitchell Swepson.

Hardik Pandeya offered some support, but he miscued to Adam Zampa in the 18th and left Kohli with much to do. With 36 runs required in the last two overs, Kohli went after Andrew Tye in the 19th over, but it went into the hands of Daniel Sams. It was out of India’s hands after then, and they fell 12 runs short of the target.