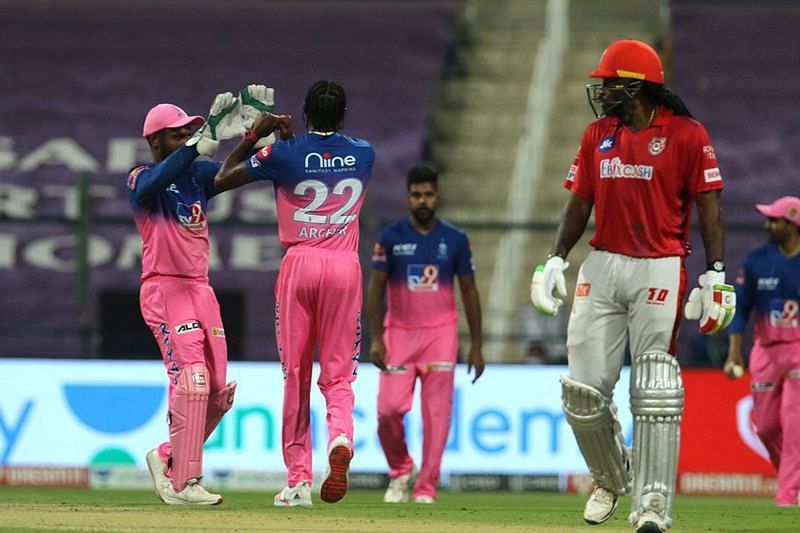 The Universe Boss, Chris Gayle threw his bat in anger when Jofra Archer dismissed him on 99. While Jofra Archer’s old tweet start roaming on the internet as it turned out true.

Rajasthan Royals and KX1P faced each other on Friday, match number 50, dream 11, IPL 2020. KX1P skipper, KL Rahul won the toss and decided to bat. KX1P scored a total of 185 with the loss of 4 wickets in 20 overs. Chris Gayle played a massive role in this huge target. He was dismissed by Jofra Archer on 99 and that is where it started.

Chris Gayle is not playing from his national team and he is also not performing well enough in the league matches. He is having a great comeback in the previous matches in IPL. He has scored 3 fifties till now and a great effort towards 100 which he couldn’t complete. He is going with a decent pace this season.

He was hitting all over the ground until Jofra Archer’s last-over came. He hit a six on a previous delivery and stood on 99. Jofra Archer took the run-up and came like a rocket. He bowled a pacer that hit in the pads and went straight into the wickets. He threw his bat in the field as he looked in anger for which he was fined the 10% of his match-fee. Archer, on the other hand, gave him a hand-shake on the way out.

After all of this happened, Archer’s fan starts sharing his tweet all over the internet in which he claimed that he wouldn’t let the batsman score a hundred if he was bowling. Co-incidentally it came true as he bowled Chris Gayle on 99 by a wild Yorker.

He has continued to impress with his pace in IPL as he took 2 wickets with 26 runs in 4 overs. He is added among the 4 leading wicket-takers after Kagiso Rabada, Jasprit Bumrah, and Muhammad Shami.

After winning their match against KX1P, Rajasthan has kept their hopes alive for the playoffs but they have to win their last league game.