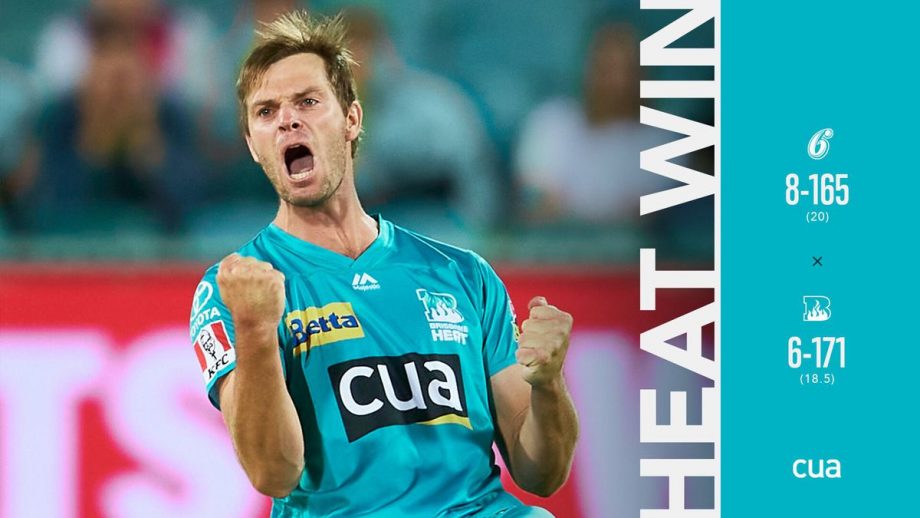 Brisbane Heat beats Sydney Sixers with 7 balls to spare and four wickets in hand at the Gabba on Saturday. Joe Burns failed to perform in his first appearance after scoring just one, the umpiring decision goes into controversy, Mark Steketee as a player of the match.

The Australian test opener, Joe Burns failed to perform in his first appearance from Brisbane Heat as he managed to score only one run in the seven balls he faced.

After having bad performance in the first two Test matches against India, Joe Burns has returned in BBL to test his luck here but he did not have a good start after dismissing on one run.

Before taking a stunner behind the crease, his batting woes were still plain to check, with Burns falling on the ball of Jackson Bird.

Meanwhile, the opener of Sydney Sixers, Josh Philippe could not reap out the benefit of second life given to him as he lost the wicket close to his half-century as there was another umpiring error which raised the controversy.

Brisbane Heat concluded the match to chase down the target of 165/8 posted by Sixers in 20 overs after an unbreakable 50 runs partnership from Lewis Gregory (31*) and Jack Wildermuth (22*).

The Sixers opener, Josh Philippe looked targeting a big score after Mujeeb Ur Rahman missed an easy caught and ball chance but he got himself dismissed shortly after scoring 48 off 36 balls and Sixers finished their innings on 165/8 in 20 overs.

Jack Edwards made 10 before falling to the Afghan spinner, Mujeeb Ur Rahman, James Vince was off to a great start but he also fell on 20 off 16 in a caught behind. Daniel Hughes was finding ways to settle in before Jimmy Peirson caught him behind the stumps on 2 of 4, leaving the Sixers 84/3 at the half-way of their innings.

When Philippe lost his wicket on 48, Sixers were in doubt to post a competitive total even against the poor chasers as Heat.

Dan Christian made only six off five before Mujeeb Ur Rahman picked up his wicket in a controversial lbw call which later showed in a review that the ball is missing the stumps.

Mujeeb finished his overs with 2/28 in a decent way to cover up his caught and ball drop of Philippe. Braithwaite fell for a duck right after that and the Sixers were 119/6.

After 15 overs, Jordan Silk stood firm around the crease to finish off the match with the wickets falling around him.

He partnered with  Ben Dwarshuis to take his side near 150 before getting himself out with an inside edge to the stumps, went on 43 off 27 balls in 19th over. Ben Manenti got himself out on the very next ball after hitting the ball in the air to give Steketee a chance of a hat-trick.

Although he could not get the wicket on his hat-trick ball, he still managed to get his career-best figures of 4/33 in four overs.

While chasing, the out of form Australian batsman Joe Burns dismissed on one-off seven balls, Jackson Bird took the wicket.

“He’s been through a horrendous season. He got that 50 in the first Test match and you thought he was back. It was a courageous knock and managed to see the side over the line and did it comfortably at the end,”

“You feel for him at the moment but hopefully he’ll be able to get himself out of this patch and that’s all you have to say to yourself”.

Max Bryant took from where Burns had left and he scored the quick 40 runs including seven boundaries before he nicked in the air and was caught by the keeper.

The match was concluded by a brilliant partnership from Wildermuth (22* off 10) and Gregory (31* off 16), who combined for a 50-run partnership off 26 deliveries to win the game with 7 balls to spare and four wickets in hand.