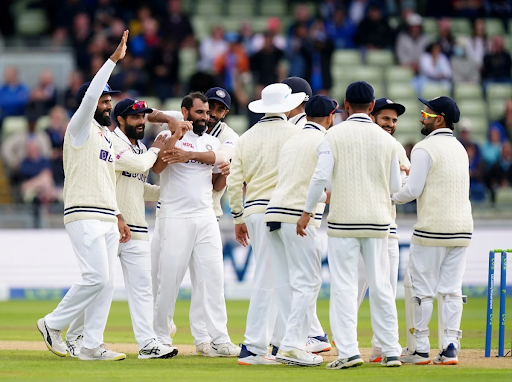 Indian captain Jasprit Bumrah produced an all-round performance to put his team in complete control of the ongoing fifth and final Test match against England being played at Edgbaston. After scoring a world record 35 runs within one over against Stuart Broad, Jasprit Bumrah took three wickets to help India reduce the home team to 84/5 in reply to the visiting teams total of 416, in which the stand-in Indian captain contributed with a brisk 31 not out.

The day began with India resuming play at 338/7 with their all-rounder Ravindra Jadeja 17 runs short of his third Test century. Ravindra Jadeja comfortably brought up his three-figure score which he celebrated with his traditional style of fencing the bat like a sword. Ravindra Jadeja eventually finished at 104 from 194 balls with the help of 13 boundaries.

Towards the end of the Indian innings, Mohammed Shami contributed 16 from 31 balls with the help of 3 boundaries but it was Jasprit Bumrah who provided late fireworks which helped him break world record set by Brian Lara as far as getting most runs within one over in Test cricket is concerned.

Jasprit Bumrah came out all guns blazing as he hammered 4 boundaries and 2 sixes from six legitimate deliveries bowled by Stuart Broad in his 18th over of the game to collect as many as 35 runs, which is a world record now.

Jasprit Bumrah — never a specialist batsman at any stage in his career — bettered the record set by Brian Lara against South Africa’s Robin Peterson, off whom the Caribbean batting legend had scored 28 runs inside one legitimate over back in 2003.

Jasprit Bumrah’s onslaught left England players smiling with a sense of helplessness around them, as the visiting side finished at 416 — a total big enough to challenge the progress made by England batsmen in recent months, especially during their home series against New Zealand.

But England batsmen once again cut a sorry figure against the might of the Indian bowling attack, with Jasprit Bumrah leading from the front. After he went through the defence of yet another new England opening batsman Alex Lees, the menacing India fast bowler had Zak Crawley caught in the slips by Shubman Gill.

The pair of former England captain Joe Root and Ollie Pope tried to rebuild, but the Indian captain broke through their resistance to send the latter back to the pavilion. Mohammed Siraj chipped in with a short ball to dismiss the dangerous and in-form Joe Root for a 61-ball 37, and Mohammad Shami, who bowled incredibly well throughout the day on Saturday had his first wicket in the form of nightwatchman Jack Leach.

At stumps, England were trailing by another 332 runs with their captain Ben Stokes (0*) at the crease in the company of Jonny Bairstow, who had crawled to 12 not out in a relatively slower, cautious innings.