India on top against Sri Lanka in 1st Test at Mohali   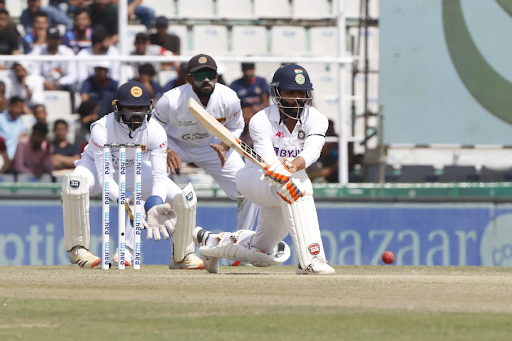 India were ahead by 466 runs in the first innings of the opening Test being played against Sri Lanka at the IS Bindra Stadium in Mohali, with their star all-rounder Ravindra Jadeja producing superb performance both with the bat and the ball.

India declared their first innings at a huge total of 574/8, and in the reply, the Sri Lankans were reduced to 108/4 at stumps on the second day with Jadeja scoring big runs as well as taking key wickets.

India, who resumed their first innings at 357/6, were bolstered to a strong total which looked beyond the reach of Lankan team, thanks to a brilliant 175 not out by Jadeja. The Indian all-rounder, who is making a comeback after a long injury layoff, was well supported by spin bowling all-rounder Ravichandran Ashwin, who scored 61 from 82 balls with the help of eight boundaries.

Jadeja recorded his highest score in Test cricket as he remained unbeaten on 175 from 228 balls, for which he hit 17 boundaries and 3 sixes. Jadeja was the only batsman in the Indian side who was able to convert starts into a big score, with plenty of them falling after doing the hard work in the initial stages of their respective innings.

Sri Lanka used as many as six different bowling options from which three bowlers got 2 wickets each. Suranga Lakmal took 2/90 from his 20 hours whereas left-arm fast bowler Vishwa Fernando was expensive, giving away 135 runs from his 26 overs while taking a couple of wickets. The left-arm Sri Lankan spinner Lasith Embuldeniya was the most impressive as he did all the hard work, sending down 46 overs to take 2/188 while bowling 2 maidens.

In their reply, Sri Lanka were off to a positive start with their opening batsman Lahiru Thirimanne and Dimuth Karunaratne keeping the Indians at bay for more than 18 overs. However, Ashwin struck in the 19th over to dismiss Thirimanne for 17, for which he faced 60 balls and hit one boundaries. Jadeja came into the attack and dismissed Karunaratne on his second ball itself, removing the Sri Lankan captain for a 71-ball 28, which was studded with 5 boundaries.

The Indians did have to wait for a bit to make a breakthrough but they had broken in the opening partnership, Sri Lanka lost wickets at regular intervals to reach 108/4 at stumps on the second day. The senior Sri Lankan batsman and former captain Angelo Mathews made 22 from 39 balls while their talented right-handed batsman, Pathum Nissanka, did well to reach 26 not out from 75 balls while hitting 4 boundaries in the process.

At stumps, Nissanka was batting in the company of Charith Asalanka as Sri Lanka were still 466 runs behind India’s massive total in the first innings.