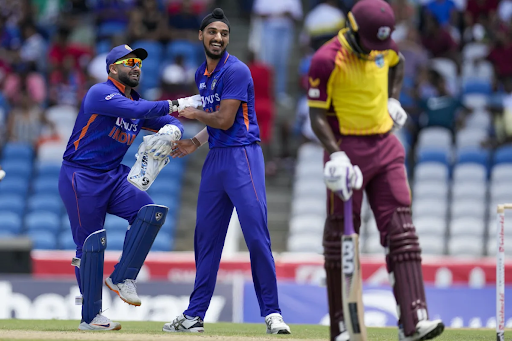 The West Indies batsmen once again cut a sorry figure against the rampant Indian team, this time in the opening T20I of the five-match series played at the Brian Lara Stadium in Tarouba, Trinidad, on Friday. The Indian team once again produced an all-round show handing the West Indies a massive 68-run defeat in the first game.

India were bolstered by a superb 64 from their captain Rohit Sharma and a fine 41 not out towards the end from their experienced wicketkeeper-batsman Dinesh Karthik, who pushed their total to a compelling 190/6 batting first.

In their reply, the West Indies once again folded under pressure, managing a mere 122/8 in their 20 overs with the likes of Ravichandran Ashwin, Ravi Bishnoi and Arshdeep Singh returning with 2 wickets apiece.

The term for India’s domination was set by the opening pair of Rohit Sharma and Suryakumar Yadav, who added 44 runs inside the first five overs to put the team on track of a big total.

The Indian captain Rohit Sharma, returning to the side after missing the ODI series which his side dominated with a 3-0 win, showed rich form with the bat hitting 7 boundaries and 2 sixes to make 64 from just 44 balls which was the highest score by any batsman from either teams.

On the other hand, opening the innings for the first time ever, Suryakumar Yadav displayed positive intent hitting three boundaries and a 6 to make 24 from 16 balls before his innings was cut short by West Indies spinner Akeal Hosein.

The Indian middle order disappointed with Shreyas Iyer making a 4-ball duck and Rishabh Pant managing just 14 from 12 balls with 2 boundaries. Hardik Pandya failed to get going as he could make just one from three balls whereas Ravindra Jadeja also could not last long enough for anyone’s liking, scoring 16 from 13 balls with two boundaries.

It looks like India would finish somewhere or 150 run mark but Dinesh Karthik played yet another characteristic knock of 41 not out from just 19 balls, clobbering 2 sixes and 4 fours in the process. He was well supported by Ravichandran Ashwin, who hit one six in his 13 not out.

The West Indies batsmen made a steady start but once they lost their first wicket — Kyle Mayers dismissed by Arshdeep Singh for 15 — they could not control the fall of wickets from either end and could never challenge India in the second half of the game.

For India, Arshdeep Singh took 2/24 from his four overs, Ravichandran Ashwin returned with 4-0-22-2 in a fine spell of spin bowling and so did Ravi Bishnoi, who recorded figures of 4-0-26-2.

The second T20I of the five-match affair will now be played on Monday at Basseterre.