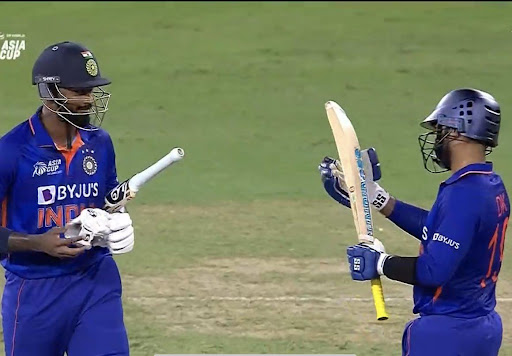 Dinesh Karthik’s power-hitting spree earned him a recall to the Indian squad and also found a place in the playing XI against Pakistan on Sunday while Former India selector Saba Karim supported Pant and expressed that Pant can “add far more value” than Karthik.

Dinesh Karthik’s IPL 2022 heroics get him back to the Indian side. He has seen a whirlwind turnaround in white-ball cricket. Karthik’s power-hitting spree earned him a recall to the Indian squad and also found a place in the playing XI against Pakistan on Sunday.

His inclusion blocked the way for the young wicket-keeper batter Rishabh Pant, which turned out poorly with many fans and specialists. Former India selector Saba Karim supported Pant and expressed that Pant can “add far more value” than Karthik.

“I was surprised because I do stick to my earlier stand of having Pant in the side in place of Dinesh Karthik because I always felt that we need to look ahead and even now I do believe that Rishabh Pant can add far more value, with due respect to Dinesh Karthik, than Dinesh Karthik. But there can be possible explanations over there about which one can chat,”

“Rishabh Pant, no doubt, has done very well even in Test cricket and one-dayers. He has been very good. But in this shortest format, he has not been an accomplished player. However, if you look at Dinesh Karthik, his graph is only going upward. He has performed well. This is the right decision. In this format, in this form, there is no use keeping him on the bench. It’s time for Dinesh Karthik to play, he should play,”

“Rishabh Pant is young, he still has plenty of time left. However, Dinesh Karthik has only 1-2 years left and he should make the most of it, the team should also use Karthik’s form and make the most of it. He can win a lot of matches, batting down the order. With Hardik Pandya and Dinesh Karthik batting down the order, I think it’s going to be difficult for most opposition bowlers,”