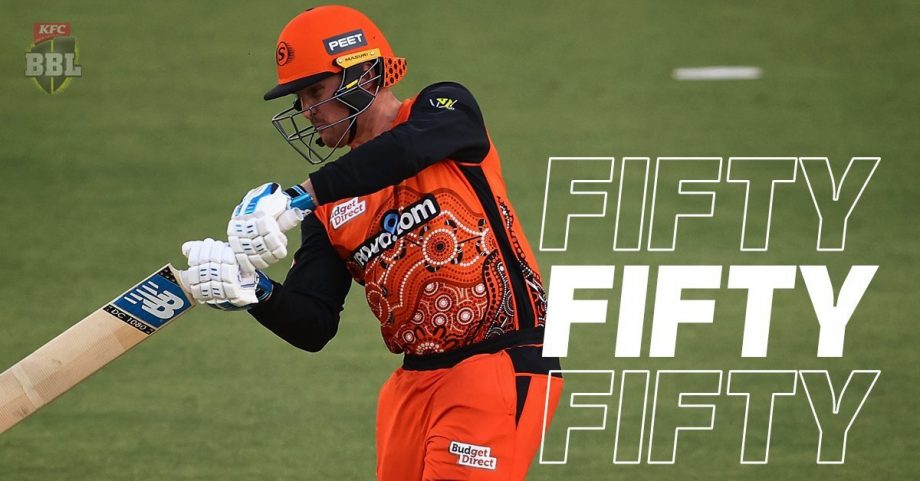 The Perth Scorchers have sealed a big win over Hobart Hurricanes with the ruthless batting performance of English batsman, Jason Roy and Liam Livingstone.

Scorchers have made 140-1 in 16.2 overs in response to Hurricanes 139-5 in 20 overs with a hundred run partnership stand of English batsman, Jason Roy (74*) and Liam Livingstone (54) to guide Perth Scorchers to a big win in their home game.

Winning the toss and opting to bat first, Hurricanes made 139-5 in the first innings at Optus Stadium, with D’Ary Short as their top scorer on 54.

Ben McDermott was the first man who got picked up by Jhye Richardson on 6 in the third over of the game.

The next on the list was Dawid Malan who faced six balls and was caught by Aaron Hardie off Jason Behrendorff for a duck.

The Scorchers faced a blow in the first innings after Mitch Marsh faced a side strain which made him leave the field for the rest of the match, replaced by the X-factor Kurtis Patterson.

Fawad Ahmed struck on Hurricanes after bowling Peter Handscomb out with the top-spinning delivery.

Colin Ingram was looking in fine touch as he smashed three fours for 18 runs but right after that Hardie picked up his wicket to get a hold on Hurricanes, caught by Patterson.

D’Arcy Short steadied the ship for Hurricanes with his 54 off 46 balls following seven boundaries to take Hurricanes to achieve a respectable total.

While chasing, Hurricanes dropped a flyer of Livingstone and he made them pay for giving a second life.

Livingstone then lost the wicket to Scott Boland, caught by Malan. Josh Inglis chipped in 7 runs to secure the win plus the bash boost points for Perth Scorchers.