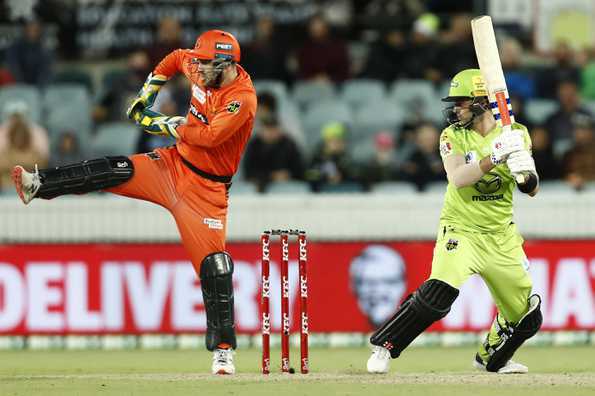 Callum Ferguson led from the front with an unbeaten 61 as Sydney Thunder (ST) registered a 7-wicket win over the Perth Scorchers (PS) in the Match No 11 of the Big Bash League (BBL) 2020-21 tournament, played at the Manuka Oval in Canberra on Tuesday. Chasing 153 to win, the Sydney Thunder finished at 156/3 in 19.3 overs with 7 wickets and 3 balls to spare.

The victory on Tuesday pushed Sydney Thunder to the fourth spot in the BBL 10 points table with 7 points in 3 matches as they have won 2 games while we have lost 1. On the other hand, the Perth  Scorchers are yet to win a game as they have 2 defeats and 1 No Result from 3 matches played so far.

It was a fine recovery staged by the Perth Scorchers when they were reduced to 36/3 with Mitchell Marsh scoring an unbeaten 52, Ashton Turner smacking  14-ball 23 and Cameron Bancroft finishing on a high with an unbeaten 34 off 26 balls, which helped their side end at 152/5 in their allotted 20 overs batting first.

The only half-centurion in the innings, seasoned Australia all-rounder Marsh faced 41 balls for his 52 not out, studded with 3 sixes and 1 four. Turner showed aggressive intent as well when he hit 1 six and 2 fours, but his innings was cut short by Sams.

The Sydney Thunder bowlers produced an all-round show with the likes of Daniel Sams, Nathan McAndrew, Tanveer Sangha and Ben Cutting all claiming 1 wicket each. The right-arm New Zealand pacer Adam Milne was unfortunate as he returned with the figures of 4-0-17-0, going wicketless in what was a fine spell of fast bowling.

In the reply, Sydney Thunder were rocked early on when their English opening batsman Alex Hales was cleaned up by left-arm fast bowler Jason Behrendorff of the first ball he faced. But Usman Khawaja scored a 25-ball 21 and partnered with Ferguson to lead the recovery for the Sydney Thunder side.

Oliver Davies was also in fine form as he hammered 3 sixes and 14 four to score 36 off 22 balls, while the finishing touches were provided by Cutting, who made 29 not out off 16 balls with 4 hits to the fence and 1 six.

The chase was strengthened by partnerships along the way with Ferguson at the centre of it. The right-hand former Australian cricketer first added 28 runs with Khwaja for the second wicket, and followed it up with a splendid partnership of 75 runs which consumed only 47 balls, for the third wicket with Davies. Towards the end he remained unbeaten as Cutting joined him to add another 47 runs for the fourth wicket which helped Sydney Thunder go past the finish line.