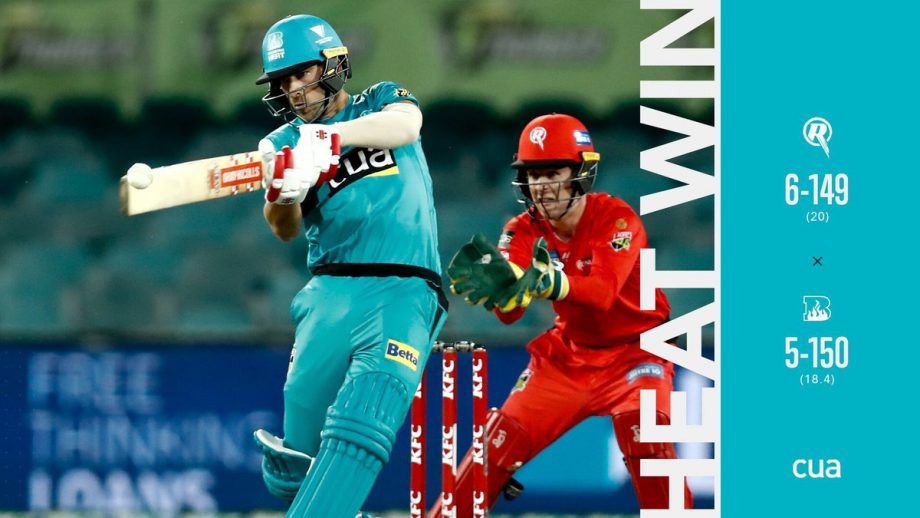 Brisbane Heat moved to fifth on the table after beating the last-placed Renegades by 5 wickets after a mid-innings collapse that Brett Lee joked on Fox Cricket: “This could be the biggest comeback since Lazarus.”

Chasing the target 149/6, put by Renegades in 20 overs, Heats skipper, Chris Lynn survived three chances by poor fielding from Renegades but he eventually put his side under pressure after giving away his wicket on 50 off 40 balls, batting with great aggression despite the chase being under control.

After a hilarious collapse of 12/4, Joe Burns steadied the ship and guided Heat home with his unbeaten 31*, also took a flyer earlier in the match.

Batting first, Heat managed to put a decent total of 149/6 with the blistering innings from Beau Webster who stayed unbeaten on 50 off 40 balls and the young gun Jake Fraser-McGurk, who scored 40 off 33.

Earlier today, Heat won the toss and opted to bowl first, the decision that awarded them soon as Shaun Marsh lost his wicket on duck in the very first over, Barlett got him in the lbw with a late inswinger. It was not an ideal start for Marsh, who missed the previous three matches for the birth of his third child.

The Renegades were going smooth until Joe Burns grabbed a superb catch at backward point in the fifth over. He jumped in the air and caught the ball with the fingertip of his right hand to dismiss Mackenzie Harvey 20 (14) off Matthew Kuhnemann.

That dismissal left Renegades 34-2 with Aaron Finch coming at four for the first time in BBL.

Sam Harper dismissed on 15 (14) by Mark Steketee in the next over. Aaron Finch was next on the list as Jack Wildermuth got him lbw on 13 (13).

Thanks to Beau Webster and Jake Fraser-McGurk, who made a 50 runs stand to take Renegades in a respectable total of 149.

In response, Heat started a bit slow with just one run in the first over and five in the second over. But Max Bryant and Chris Lynn were moving the scorecard with some pace and they kept rotating the strike rate with a boundary in almost every over.

Max Bryant lost his wicket in the seventh over to Peter Hatzoglou on 23 (26), giving an easy catch to Beau Webster.

Heats fielded well as compared to Renegades but they did what was least required after Noor Ahmad dropped Chris Lynn on 22.

Heats reached the Bash Boost point after achieving the target 72 in the last ball of 10th over bowled by Noor Ahmad.

Prestwidge almost got the wicket of Chris Lynn on 35 but he wasn’t lucky enough as the flyer sent by Lynn was given a no-ball which Shaun Marsh caught in the first place.

Chris Lynn was given another chance when he slashed to Imad Wasim and Peter Hatzoglou misread the ball and it fell short of him.

Chris Lynn made them pay after scoring 51 off 40 balls before he chopped his stumps in the 14th over, bowled by Richardson.

Mark Waugh seemed unimpressed by the tactics of Chris Lynn and he shared it on Fox Cricket:

“They’ve left the door open for the Renegades through Chris Lynn playing a shot he didn’t have to play. I just think Chris Lynn’s got to be better than that as a leader. The other guys watch him in the way they. I know he’s free-flowing and a box office player, but sometimes you’ve got to be smarter than that.”

After that, Lewis Gregory lost an unnecessary wicket after edging back to the keeper off Prestwidge. Joe Denly 31 (25) came next on the list after throwing the catch on mid-on.

Heat lost 4 wickets with the margin of 12 runs which angered the commentators but finally, Joe Burns 31* (15) scored the winning runs and took his side home with 5 wickets in hand and 8 balls to spare.