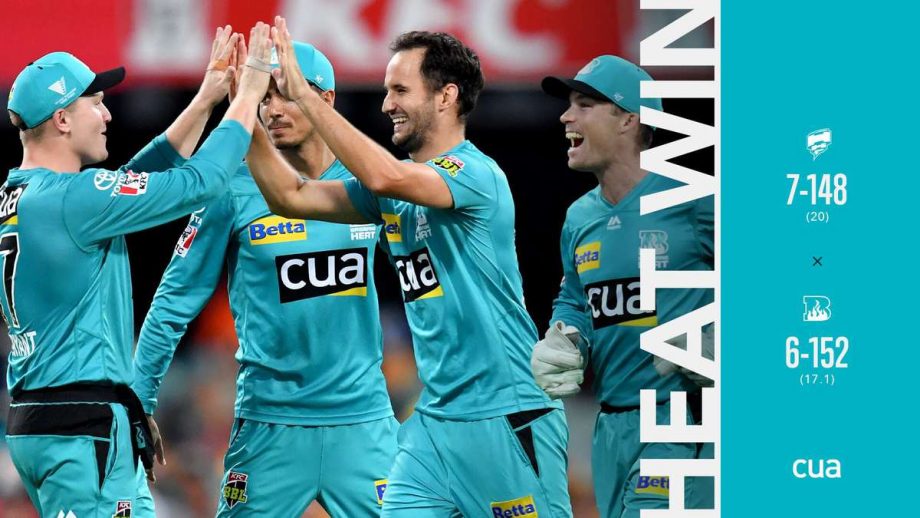 Things finally went in the favour of Brisbane Heat as they won a one-sided game against Hobart Hurricanes to mark their first victory in season 10. Lewis Gregory named as player of the match for paving the way for Brisbane Heats.

Despite the absence of Brisbane Heat’s skipper, Chris Lynn and the addition of Hurricane’s powerhouse David Malan, the Heat looked right on the track from the start after winning the toss and elected to bowl first. The decision of bowling proved correct as they tore down the top order to open the door for their first win.

James Bazley, the debutant for Heat dropped a sitter early to give Ben McDermott another life but Jack Wildermuth not after so long picked-up the wicket of opener David Malan.

D’Arcy Short was looking in a solid touch but came in Lewis Gregory, picked him up at the third ball, dropping right into the hands of Bazley and added another wicket in the account of Brisbane Heat. Peter Handscomb was the next batman coming in.

Then came the real match-turning point, Gregory struck two balls in a row, picked up the wicket of David Malan who just scored 15 runs and Peter Handscomb on the very next ball for only 7 runs.

The 28-year-old talent played for the National T20 team of England over the past year and right after that, he was signed by Brisbane Heat as an overseas player for the season.

The Hurricanes did not perform from the start and they only managed to give a final target of 148/7 in 20 overs, giving Brisbane Heat a real chance to turn things upside down.

Hurricanes faced another blow after the left-arm pacer, James Faulkner pulled-up his muscles in the second over, got the injury, as a result, he immediately left the field to get the medical attention and he never returned to the field.

It was a plus point for Brisbane Heat and the openers, Max Bryant and Sam Heazlett cashed this opportunity to build a solid opening partnership.

After a few overs, the game looked out of the reach for the Hurricanes. Nathan Ellis finds a way to break the partnership, Max Bryant hits the balls straight into the hands of David Malan, who never drops one. Hurricanes keep digging on Heat to find a way for their win.

It was never on Hurricanes side but suddenly D’Arcy Short put some life back in the contest, picked up the wicket of Dan Lawrence for a duck. Right after that, Sam Heazlett followed Dan Lawrence, gave-up an easy catch to Malan on 48.

Short kept striking again and again to raise the winning chances of Hurricanes. This time he took an extraordinary catch by himself, caught and ball Tom Cooper to add another wicket in is an account, adding to the quick dismissals right after Gregory and Wildermuth’s wicket.

Brisbane Heat decided to end the drama as stand-in skipper Jimmy Peirson sailed the ship steadily alongside James Bazley to seal a one-sided win by 4 wickets with three overs to spare.