“Batters have stopped taking a risk against me,” says Rashid Khan  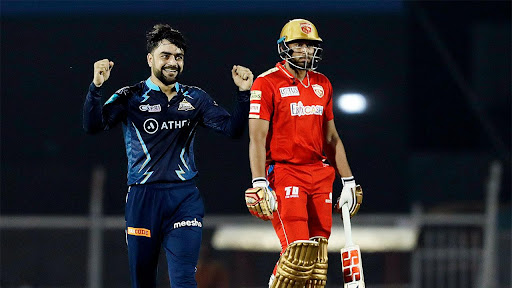 Rashid Khan has been stable without being exceptional like in previous years and the reason for that is the safety-first approach by opposition batters during this season of IPL while he has taken six wickets from four games at an economy rate of 6.68.

Afghanistan star spinner Rashid Khan has been stable without being exceptional like in previous years and the reason for that is the safety-first approach by opposition batters during this season of IPL.

He has taken six wickets from four games at an economy rate of 6.68 but batters across teams have cleared the Afghan great pretty well. But the 23-year old, who is among the most desired leg-spinners in franchise cricket around the world, is not shocked and says it’s just a matter of time.

“I’m happy with the way I’m bowling in this competition so far,”

“I don’t focus on results; it’s all about how I’m bowling. At the moment, my bowling is great. But it’s about the opposition; they don’t take that kind of risk against you which will allow you to take more wickets,”

“But whenever there are enough opportunities as a bowler, I would be smart enough to get them out. So far I’m happy with my bowling, the pitching has been great,”

Rashid deliver a spell of 1/28 against his old IPL team Sunrisers on Monday, as Gujarat suffered their first defeat after three wins, losing by eight wickets.

One bashful about getting his 100th IPL scalp, Rashid said he’s always been a slow starter in the IPL.

“If you look at the stats in IPL, I always have similar (slow) starts. I’ve always taken 5-6 wickets, not 12-13 in the first four-five games. It always remained the same. But definitely, I will try my best to keep improving. There will be a time when I’ll deliver that magic spell,”

Rashid, who has featured in the IPL from 2017 to 22, said it’s an unbelievable journey for him so far.

“Coming here from Afghanistan and playing all the games since my debut, it’s been amazing. Five years back, I didn’t even think of playing IPL. Nearing 100 (wickets), becoming vice-captain of Gujarat, it’s massive. I’m so lucky and blessed.”

On being part of the leadership group by being the deputy to Hardik Pandya, Rashid said the best part is about having clarity about their roles.

“At times, you perform and at times you don’t. The mindset is about giving 100 percent that’s more important than the result. We as a team are clear about it and everyone knows about their roles.”

While talking about their defeat against SRH, Rashid said they fell short of about 15 to 20 runs.

“I felt like we fell short by 15-20 runs and could not capitalize on the start. They did well chasing under pressure and kept the run rate going,”

Gujarat Titans will now face the Rajasthan Royal on Thursday at the DY Patil.