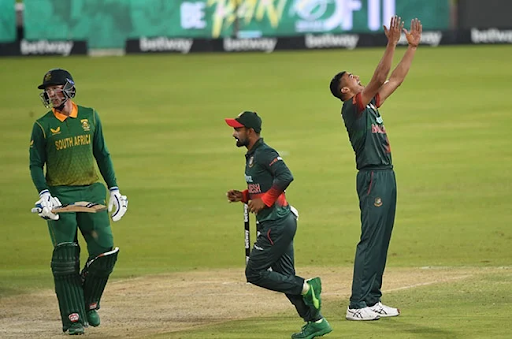 SuperSport Park in Centurion witnessed a historical performance from Bangladesh as they achieved their first win on South African soil. Bangladesh was up against the hosts South Africa in the first one-day international of three-match ODI series which they won by 38 runs courtesy of true team performance.

Earlier in the day South Africa won the toss and invited Bangladesh to bat first. The visitors had a slow start to the innings but skipper Tamil Iqbal and Liton Das put their foot on the gas and put up a 95 runs partnership for the first wicket in the first twenty overs.

South Africa found wickets in quick succession as Keshav Maharaj sent Liton back to the dugout just one delivery after he brought up his half-century to push Bangladesh to 104 for the loss of 2 wickets. Mushfiqur Rahim could not contribute much as well and walked back at the score of nine.

Shakib Al Hasan and Yasir Ali put the innings back on track with a spectacular 115 runs partnership for the fourth wicket as the two batters took the bowlers to the cleaners during the middle overs. Shakib was the top scorer for his side with 77 runs to his name in 64 deliveries.

South Africa found another breakthrough in the final ten overs of the game as they found the wickets of Shakib and Yasir to put the brakes on Bangladesh’s scoring rate. Mahmudullah Riyad and Afif Hossain tried to build up a partnership to help their side put over 300 runs on the board. However, Jansen put a brake on their plans as he dismissed Hossain in the 46th over to put the visitors 272 for the loss of six wickets.

The visitors however were able to get past 300 runs on the board courtesy of finishing touches from Mehidy Hasan and Taskin Ahmed as the two remained unbeaten and helped Bangladesh put up a total of 314 runs on the board for the loss of seven wickets in fifty overs. 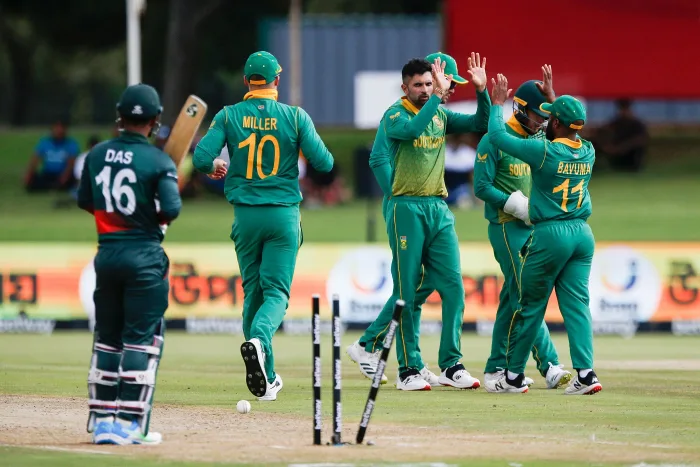 Chasing a big total of 315, South Africa didn’t have a good start in the powerplay as they lost 3 wickets inside the powerplay overs. Opener Janneman Malan was the first one to go as he nicked one behind to the keeper in the first over of Shoriful Islam’s first over. His partner Kyle Verreynne scored a good-looking 21 at the start but he can’t continue his start as he was found plumb in front of the wickets off the bowling of Taskin Ahmed.

Aiden Markram in at number 4 position came out to bat after the departure of Verreynne but in the very same over of Taskin, he was sent back towards the pavilion for a duck. Skipper Temba Bavuma scored 31 runs from 55 balls but never looked in total control of his batting and ended up nicking one to the keeper.

The duo of Rassie Van Der Dussen and David Miller steadied the ship of the home side as they built a solid partnership in the middle overs. Van Der Dussen was clinical with the bat but he missed out on a century as he scored 86 runs in this chase before giving away his wicket courtesy of a brilliant catch by Yasir Ali.

On the other hand, Miller played with an aggressive mindset and looked dominating throughout his stay but in the end, he was short of the partners, and in case of increasing the scoring rate he lost his wicket to Mehidy Hasan at the score of 79 while Andile Phehlukwayo failed to make an impact with the bat from the other end.

Keshav Maharaj and Lungi Ngidi smoked a couple of blows towards the end but those weren’t enough to take their team over the final hurdle and they lost the game by 38 runs.

Taskin was the pick of the bowlers as he picked up 3 important wickets and kept the run-rate in check. Shoriful was also brilliant at the start. Mehidy Hasan bowled superbly in his second spell and grabbed 4 wickets in his 9 overs. Shakib was awarded the player of the match after his brilliant effort with the bat.

Skipper Tamim Iqbal was stoked after the historic win and had this to say about the performance of his team,

“Definitely it’s a big win for us. I and Liton gave the perfect platform. Yasir and Shakib played superbly and a nice couple of cameos in the end that lifted us to the huge total. Our fast bowlers have been doing well. If you think about Bangladesh now it’s not about just the spinners, it’s also about the pacers nowadays. Mehidy came back really well and he came back towards me by saying give me the ball I will change the game for you and if you ask me he was my man of the match.”

The visitors will be super excited with the win here and look to win the series to establish a historic feat in the history books.