“Arshdeep had taken all the criticism on the chin and was upbeat,” says Arshdeep’s father  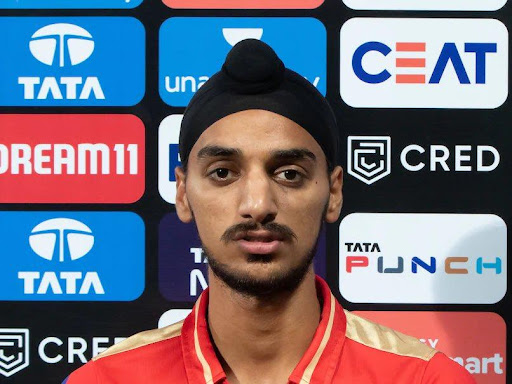 The young Indian seamer Arshdeep Singh dropped a relatively easy chance off the bowling of Ravi Bishnoi at the crucial moment of the game, and as a result, Asif Ali got a life and after that, Arshdeep is being attacked by a troll on social media.

The high-octane clash between Pakistan and India was played on Sunday. Babar Azam-drove’s side came out on top against India as they registered a five-wicket victory after chasing down a total of 182.

However, the biggest talking point of the game came in the 18th over of the innings as young seamer Arshdeep Singh dropped a relatively easy chance off the bowling of Ravi Bishnoi at the crucial moment of the game, and as a result, Asif Ali got a life.

After that, Arshdeep is attacked by a troll on social media. The pacer has told his parents that he is laughing at the tweets he is reading on the internet and he is only going to take positives out of it.

“Arshdeep had taken all the criticism on the chin and was upbeat. “His exact words were, ‘I am laughing at all these tweets and messages. I am only going to take positives from it. This incident has only given me more confidence,”

“Arshdeep told us that the whole Indian team is supporting him,”

“As a parent, it feels really bad. He is only 23. I don’t want to say much about trolls. You can’t shut everyone’s mouth. Without fans, there is no game. Some stand by you no matter what and others can’t digest a single loss. But at the end of the day, only one team can win,”

Speaking at the post-match press conference, India batter Virat Kohli showed his support for Arshdeep, saying mistakes can happen from anyone in high-pressure games:

“Anyone can commit the mistake, the situation was tight. It was a high-pressure game and mistakes can happen. I still remember I was playing my first Champions Trophy and the match was against Pakistan, I had played a very bad shot against Shahid Afridi.”

“I was watching the ceiling till 5 am, I was not able to sleep and I thought my career is over but these things are natural. Seniors players get around you, there is a good team environment right now, I give the credit to the captain and coach. The players learn from their mistakes. So one must accept his mistake, address it and look forward to being in that pressure situation once again,”