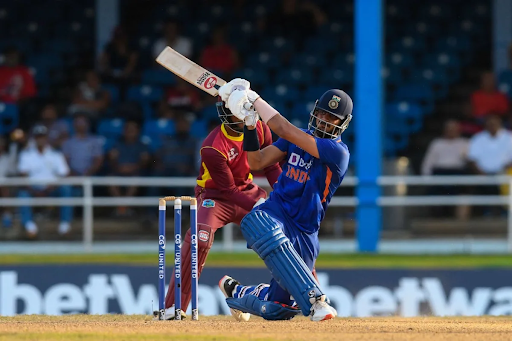 India clinched the ongoing three-match ODI series against the West Indies by winning the second match at Port of Spain in Trinidad by just 2 wickets in a stunning finish, which was powered by a brilliant 64 not out by bowling all-rounder Akshar Patel, who waged a lone battle towards the end to power his team to one of the most memorable wins against the Caribbean side in 50-over cricket.

Akshar Patel, who walked out to bat at No 7 in a huge chase of 312 to win against the West Indies on Sunday night, produced a spectacular innings which consisted 3 boundaries and 5 sixes as he made 64 not out from just 35 balls in a stunning onslaught against the home team bowlers, who had India under the pump during the chase for a considerable part.

The visiting Indian side finished at 312/8 in 49.4 overs in reply to the West Indies’ total of 311/6, which was powered by a brilliant 115 from their wicketkeeper-batsman Shai Hope and useful contributions from the likes of Nicolas Pooran (74), Kyle Mayers (39) and Shamarh Brooks (35).

West Indies batsmen once again stood tall against a talented Indian bowling line-up to deliver a big score for their bowlers to bowl at. Shai Hope was absolutely magnificent with the bat, scoring 115 from 135 balls with the help of 3 sixes and 8 fours to provide the platform for his team to launch themselves for a big total.

While the third wicket stand of Hope and Brandon King did not do wonders, it was a 117-run association for the fourth wicket between Shai Hope and Nicolas Pooran, the West Indies captain in the shorter formats,  that powered them to a strong total in the first essay.

In their reply, India were bolstered by Shubman Gill (43) and Shreyas Iyer (63) but the others could not make a lot of difference. India captain Shikhar Dhawan (13) was dismissed earlier in the chase while Suryakumar Yadav played one on to his wickets to be dismissed for 9.

India wicketkeeper-batsman Sanju Samson once again showcased his mettle by producing a brilliant innings of 54, which came from 51 balls with the help of 3 sixes and as many boundaries. Deepak Hooda made a valuable 33 from 36 balls in an innings wherein he failed to free up his arms.

But the star of the Indian innings was Akshar Patel, who was left with more than 50 to chase and tailend batsmen to work with in the remainder of the innings. Akshar Patel, known for his batting prowess in the Indian Premier League, did not flinch under pressure as he brought the equation down to almost a run-a-ball in the last three overs and finished the game by hitting a six straight down the ground to complete India’s series victory.