Absolute drama! Brisbane Heat licks the dust by 1 run in a chaotic match against Hobart Hurricanes 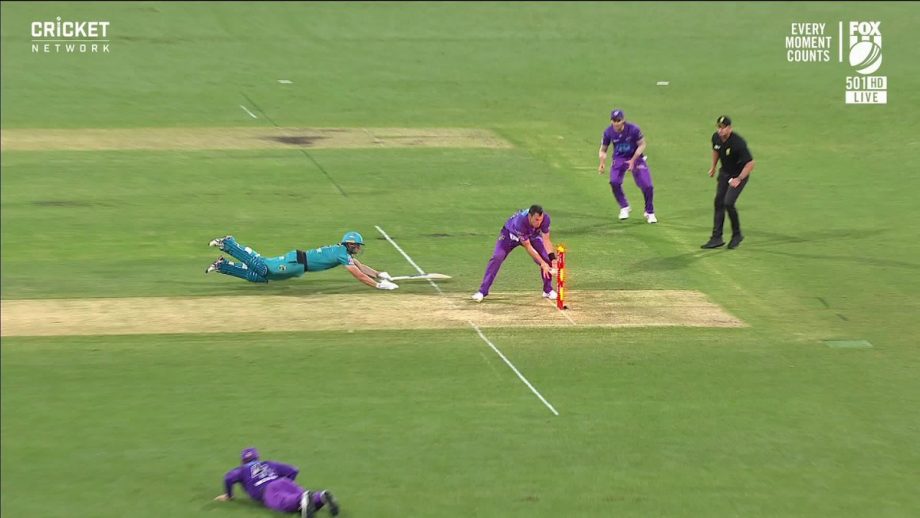 Hobart Hurricanes defeated Brisbane Heat by one run in the most dramatic game of BBL ever in match number 20 at the Gabba. The player of the match, Mujeeb Ur Rahman took fifer from Heats but it went in vain as they lost the match by 1 one run with the margin of centimetres.

Things went against Brisbane Heat once again as they lost a nail-biter in the final ball to Hurricanes at the Gabba on Wednesday.

Given the target of 150 in 20 overs with the brilliant bowling performance from Afghan leg-spinner, Mujeeb Ur Rahman who took a fifer with 15 runs in four overs. It looked like an easy match for Hets but due to an awful start, they were left strangling in the final over, needing 2 runs from the final ball and one to draw.

Mark Steketee was the striker and he hit the ball towards Colin Ingram with full of his power and dived to the other end of the crease but Ingram showed a great intent of fielding as he threw the ball with the speed of bullet towards the wicket and it hit the stumps before Steketee’s bat reached the ground.

The decision went upstairs and it looked as if Ingram got him out but it was touch and go decision for the third umpire and finally the signal came from the big screen and unfortunately Heats were the ones with the heartbreaks.

The heat was clearly in a strong position after restricting Hurricanes to 150 after boiling them out with two balls to spare.

The star of the day was Afghanistan’s young gun, Mujeeb Ur Rahaman who destroyed the batting of Hurricanes in the first innings with an outclass 5/15 in 4 overs.

Earlier, he picked up Hobart’s Ben McDermott on 4 but his most significant breakthrough was David Malan who was going with the decent pace and Hurricanes were finally paving their ways but he bowled out on 39.

The Heats started very lousily as if they did not want to win the match. Losing early wickets in the three overs with 3-8 put them in a really tough position.

Max Bryant (32) and Lewis Gregory (29) picked up the left-overs and pushed the scoreboard to 5-66 to put some life back in the contest.

Peirson broke the partnership in the fourteenth over Bazley stood firm alongside Simon Milenko who also lost the wicket after scoring only 3 runs, Steketee came on the crease to join Bazley till the end of the match.

With seven needed off the final over, Heat was pretty confident for the win but it was all ruined after Steketee could not ground his bat on the ground for a super-over competition when they required 2 off 1.