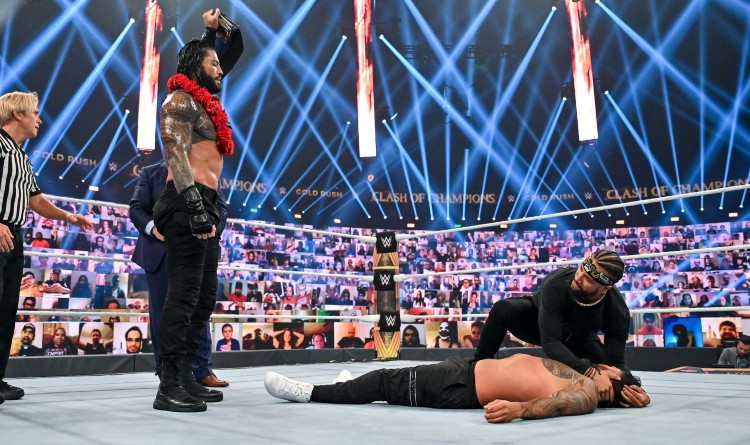 This week’s WWE Smackdown witnessed once again the one-upmanship of Universal champion Roman Reigns over Jey Uso. This even led to Uso beating Kevin Owens to book a place in the Survivor Series Men’s team. Uso won after underhand tactics.

With a babyface like Owens making more sense on the Survivor Series team, Uso’s presence is now by mere underhand tactics coupled with the distraction by Reigns who also showed up during the former’s match with Owens.

Now, Reigns as Universal champion has continued to draw in negative reactions from the majority of the WWE Universe. Uso, who looked good during his Hell in a Cell fight against Reigns, has now seemingly joined the “Tribal Chief”. Last week, post Uso’s win over Daniel Bryan, he proceeded to inflict a severe beatdown that led to the leader of the Yes movement being stretchered out of the arena. Reigns expressed appreciation for this move by Uso.

This entire Reigns-Uso family storyline is getting stale as the weeks pass by. The whole Reigns-Uso segment and initial rivalry was expected (by fans) to result in a huge babyface turn for Uso as the Universal champion and Reigns moving on to other feuds in the company of Paul Heyman. But, two months down the line, Reigns continues to be the one calling shots and Uso looks like he has fallen in line leading to stale storylines that seldom have substance and seem like they have been conceptualized for just one purpose – to make Reigns look dominant.

There are other superstars on Smackdown who need solid pushing now. Reigns as the next “face” of WWE (or a heel) is not simply working out from fans’ perspective. Jey Uso who now looks good as a singles competitor could see his push ended even before he realizes as Reigns with Heyman is a most bizarre combination of all time, and in case Brock Lesnar chooses to return to WWE which he should do by atleast Wrestlemania 37 (for one final run), then there could be yet another confusion for fans resulting in more boos for Reigns.