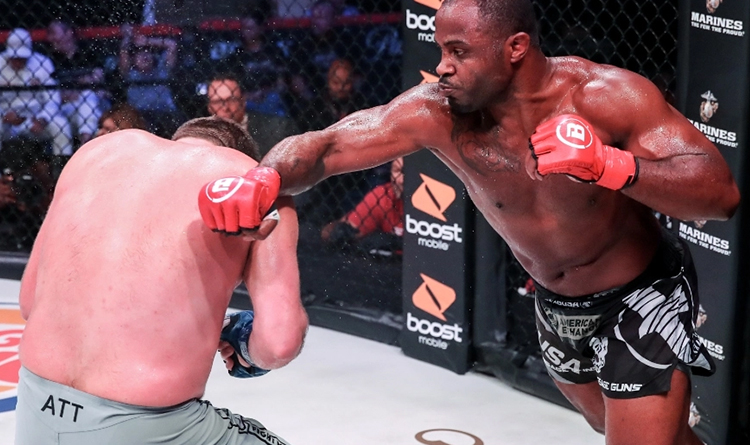 Heavyweights Tyrell Fortune and Said Sowma will fight in the Bellator 251 co-main event on November 5. A bout between welterweights Derek Anderson and Killys Mota was added to the card as well.

Corey Anderson will make his debut at Bellator 251

Fortune, a former NCAA Division II wrestling champion, signed with Bellator in 2016 and won 8 clashes in a row. In February 2020, Tyrell was knocked out by Timothy Johnson and suffered the first loss. His last fight against Jack May ended in a no contest due to an illegal shot to the groin. Sowma won the Titan FC heavyweight title in September and transitioned to Bellator. Said has a 5-fight win streak and his record currently stands at 6-1.

Derek Anderson was scheduled to take on Paul Daley at Bellator 247, but the bout was cancelled after Daley had been hospitalized due to side effects of weight cut. The Barbaric has got an opponent at last and will face Killys Mota – a Brazilian mixed martial artist with a record of 12-1. Mota defeated Mandel Nallo by TKO in his debut in Bellator in October 2019.

Melvin Manhoef vs Corey Anderson will headline the Bellator 251 fight card. Manhoef began his MMA career in 1995 and amassed a record of 32-14-1, 2 no contests. Melvin became a title contender in 2016 and 2017, but he lost the reigning champion Rafael Carvalho on both occasions. Then No Mercy won two consecutive bouts and was eyeing the middleweight crown again. Anderson competed in the UFC from 2014 to 2020. After losing a fight against Jan Błachowicz in February, Cory signed a contract with Bellator and announced his debut bout against Manhoef. Anderson has opened as a huge favorite and is likely to win by KO/TKO.