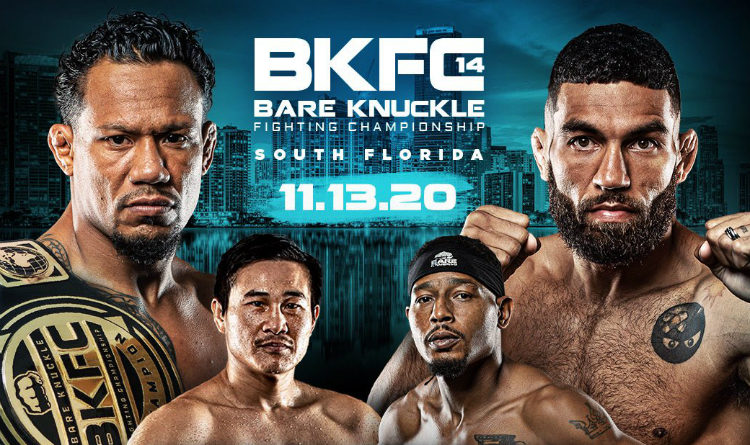 Luis Palomino and Jim Alers will fight for the BKFC super welterweight title in the Bare Knuckle FC 14 main event on November 13.

Palomino transitioned to BKFC from MMA organization ONE in 2019. He beat Elvin Brito in semi-finals and knocked out Isaac Vallie-Flagg winning BKFC’s tournament final in July 2020. Alers competed in mixed martial arts as well and debuted in BKFC last year. In the promotion, Jim amassed a stunning record of 4-0, 3 victories by KO/TKO.

Alers triumphed in quarterfinals and was supposed to face Palomino at BKFC 11. However, he had to withdraw from the competition after his coach had tested positive for COVID-19. Therefore, Luis got a free title shot. Now, Jim is looking forward to taking the belt away from his former MMA Masters teammate.

Dat Nguyen will face Reggie Barnett Jr. for the interim BKFC 135-pound title in the Bare Knuckle FC 14 co-main event. Nguyen is a former professional boxer with a record of 20-3. He made his debut in BKFC last year and won 2 bouts in a row. Barnett, an ex-MMA fighter, signed a contract with BKFC in 2018 and compiled a record of 5-2. Reggie has a 2-fight winning streak and is considered a slight favorite.

Bare Knuckle FC 14 will take place in Miami at 8 PM ET. The event will be broadcasted live exclusively on the Bare Knuckle TV app. The tournament is set to be hold with fans in attendance. The fight card includes 9 more contests: Bostwick vs Vogel, Diaz vs Benedetto, Ricchi vs Cutter, Arzeno vs Juusola, Grant vs Johnson, Hoch vs Chiffens, Hart vs Eckholm, Hunt vs Long and Evans vs Johnson.