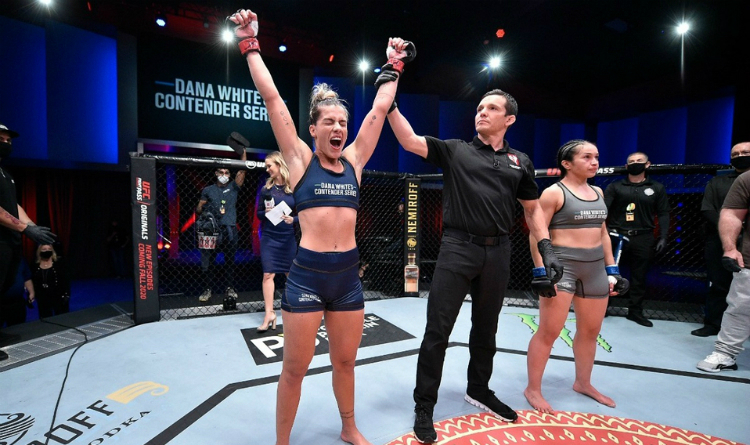 The UFC signed deals with Natan Levy, Nikolas Motta and Luana Pinheiro who won their bouts at DWCS Season 4: Week 9 on November 10.

Israeli lightweight Levy faced American mixed martial artist Shaheen Santana. Natan performed takedowns in each of 3 rounds and dominated on the canvas. However, Shaheen had an advantage on the feet and landed several power shots. In the third heat, Levy brought the bout to the canvas, passed Santana’s guard, set up an arm-triangle choke and submitted his opponents at 0:55.

Brazilian Motta took on American lightweight Joseph Lowry. Nikolas landed lots of punches and kicks but Joseph took several heavy shots and proved he had a chin of stone. Motta was close to finishing the contest in the third round – he blew up his opponent’s face with hard shots and pushed him back against the cage. Nevertheless, Lowry survived and lost by unanimous decision.

A strawweight clash between Brazilian Pinheiro and American Stephanie Frausto ended in the opening round. Luana threw an outstanding combination landing 2 left and a right hook, dropping her rival to the mat and finishing her off with a flurry of punches on the ground. The referee had no other choice but to stop the contest at 2:48. As a result, Pinheiro won by KO.

UFC president Dana White congratulated the fighters with spectacular victories and handed them contracts with the promotion. White was excited with Levy’s submission and Pinheiro’s knockout, but he advised Motta to work on his killer instinct. Mario Sousa and Danny Sabatello beat their opponents by unanimous decision at DWCS Season 4: Week 9 but failed to earn deals with the promotion.