Hermansson vs Vettori: does Marvin have The Joker up his sleeve? 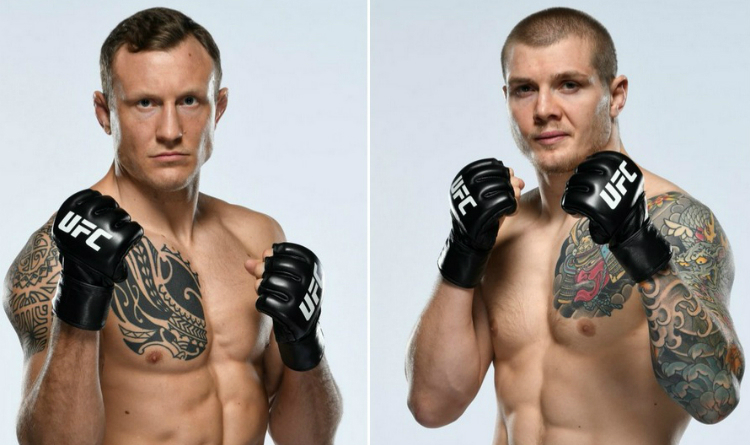 Middleweights Jack Hermansson and Marvin Vettori are set to headline UFC Vegas 16 on December 5. Does The Italian Dream have The Joker up his sleeve?

Hermansson started his professional MMA career in 2010 and amassed a record of 21-5. The Joker won the ECFF title in a debut bout and earned the CWFC belt 4 years later. Jack defended the CWFC gold twice, added the WFS title and signed with the UFC in 2016. In the promotion, Hermansson won 8 of 11 contests. He has never got a title shot in the UFC. However, Jack took fourth place at middleweight after beating Ronaldo Souza and Kelvin Gastelum. The Joker dropped only 1 of 6 last clashes – to Jared Cannonier in September 2019. He set a record for the most significant strikes landed in a 5-round middleweight bout (148) in a fight against Ronaldo Souza.

Vettori has been competing in MMA as a pro since 2012. His current record stands at 15-4-1. The Italian won Venator FC welterweight championship in 2015, moved up to middleweight after missing weight in a title bout against Jack Mason and transitioned to the UFC. Marvin gained 5 victories and suffered 2 losses in the promotion, a showdown against Omari Akhmedov resulted in a draw. Vettori defeated 3 last opponents and was ranked 13th at middleweight. Marvin was awarded a bonus for the best performance in his previous contest against Karl Roberson. 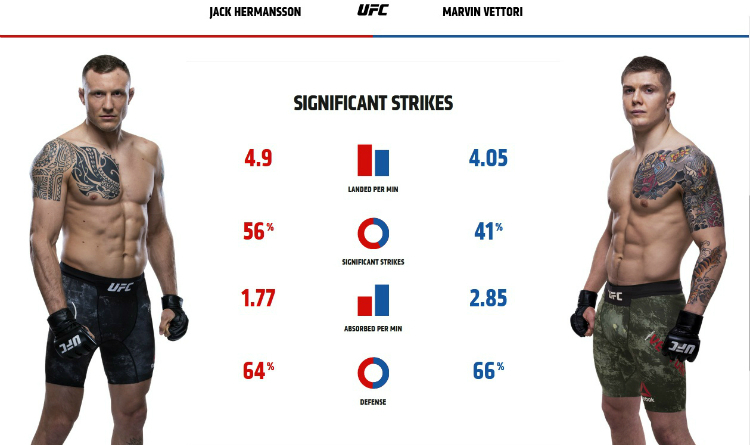 Jack brings the fight to the canvas 66% more frequently. Vettori makes 29% fewer submission attempts; however, he has a better takedown defence. 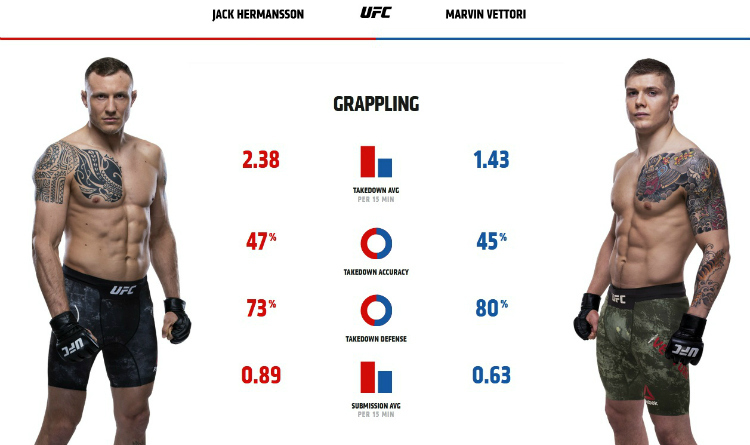 Vettori trained in kickboxing, while Hermansson did not coach in striking martial arts. Nevertheless, Jack outperforms his rival on the feet. He is much more accurate and takes fewer blows. Marvin has faster hands, but he lacks punching power – his knockout rate stands at just 13%.

The Joker went in for Greco-Roman wrestling and BJJ. The Italian earned a brown belt in BJJ. Due to a solid grappling background, Hermansson has a high takedown accuracy and brings the fight to the canvas very often. Vettori focuses on striking and makes takedowns less frequently. However, the Italian masterfully defends grappling exchanges (both takedown and submission attempts).

Jack has an edge in all aspects of combat, particularly in grappling. Therefore, he has a great chance to win. The Joker is a pressure fighter. He tends to avoid taking opponents into deep water. His average fight time is 6:18. Thus, he will likely score a victory before the fourth round.

Marvin opens up quickly as well but has troubles with finishing his rivals (6 of 7 last contests reached the time limit). Because of the fast pace, the Italian starts slowing down in the second heat. However, he has never lost by stoppage. Jack has a whopping 52% knockout rate, and Marvin is an experienced BJJ artist, which makes him hard to be submitted. In light of these factors, Hermansson is supposed to defeat Vettori by KO/TKO.