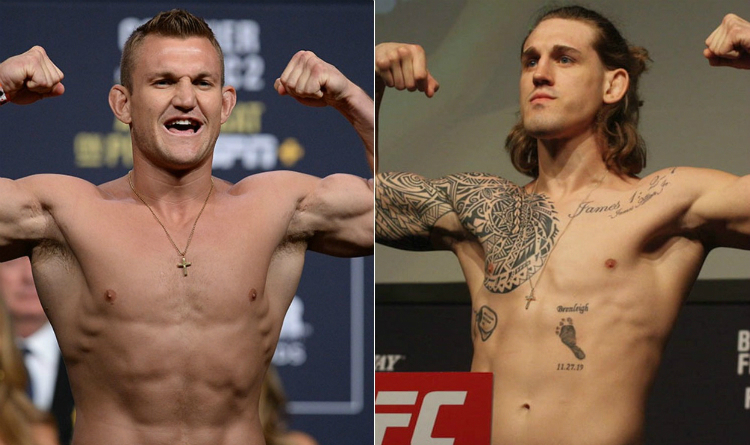 Middleweights Ian Heinisch and Brendan Allen will meet inside the octagon on the main card of UFC Fight Night 182 in Las Vegas on November 7. Who has a better chance to win the bout?

Heinisch compiled a record of 14-3. He started competing in MMA in January 2015 and became a SCL champion 9 months later. In 2018, Ian won the interim LFA title, knocked out Justin Sumter at Dana White’s Contender Series 15 and signed a deal with the UFC. Heinisch gained 3 victories and suffered 2 losses in the promotion. In the last contest, Ian beat Gerald Meerschaert by TKO, cut off 2-fight losing streak and was ranked 15th at middleweight.

Allen amassed a record of 15-3. He began his MMA career in 2015 and won the VF belt a year later. In 2018, All In became the LFA middleweight champion and defended the title. Brendan submitted Aaron Jeffery at Dana White’s Contender Series 20 and transitioned to the UFC in 2019. He has defeated 3 opponents in a row at promotion’s events extending his winning streak to 7 bouts. Allen takes 20th place in the rankings of the best MMA middleweight fighters. 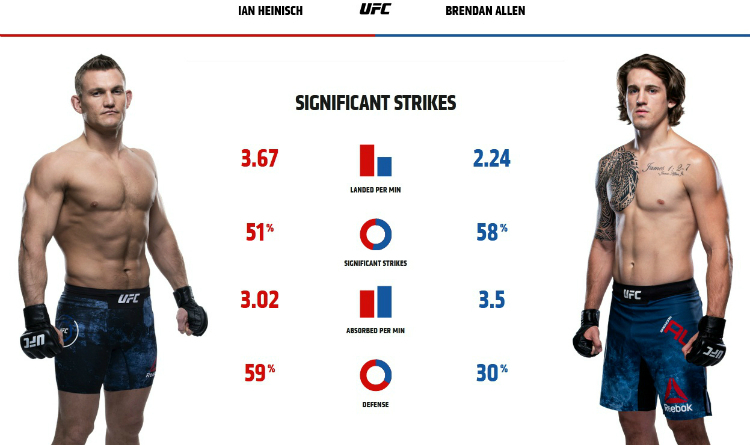 Allen performs twice as many takedowns and outnumbers Ian’s submission attempts almost 10 to 1. 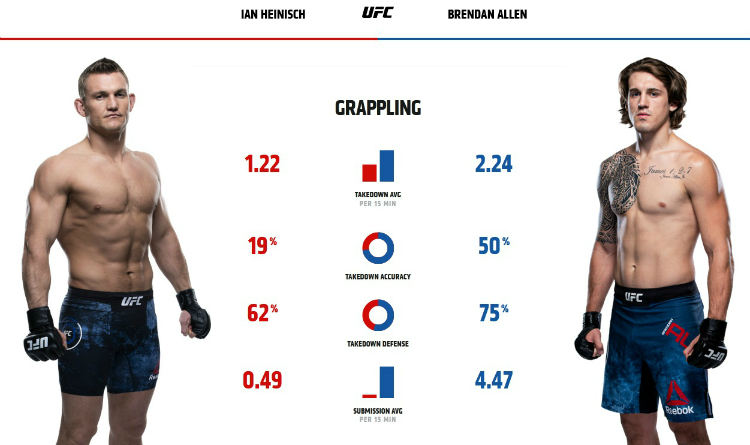 Heinisch trained in Muay Thai, while Allen practiced boxing. Therefore, Ian is a more versatile striker. He throws kicks, elbows and knees much more often. All In, on the contrary, focuses on punches. Furthermore, Brendan’s defense is very poor – he takes too many blows but has a strong chin and is always ready to brawl.

Allen earned a black belt in BJJ, but Heinisch has no regalia in grappling. Thus, Brendan has a great advantage in wrestling. He successfully makes 75% of takedowns, while Heinisch defends only 62% of attempts. Obviously, All In will be able to bring the fight to the canvas and show his impressive ground-and-pound and submission skills. However, in a bout against Omari Akhmedov, Ian proved that he can artfully avoid grappling exchanges and is hard to be controlled on the mat.

Brendan has a 3-inch reach advantage, is 8 years younger and overcomes his rival in grappling stats. Therefore, All In is likely to be victorious. Allen has a whopping 93% finish rate (57% by submission and 36% by KO/TKO). However, Heinisch suffered 66% of losses by decision and is considered one of the most steadfast middleweights. In the light of these facts, the bout will most probably reach the time limit.