Figueiredo vs Perez: will God of War defend UFC title? 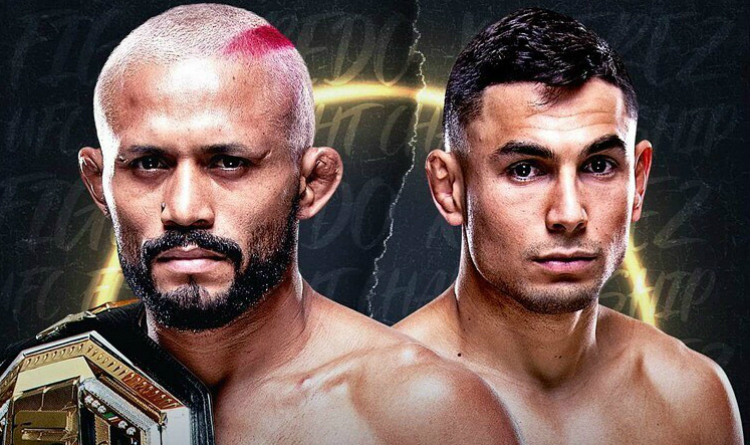 Deiveson Figueiredo is set to defend the UFC flyweight title against Alex Perez in the UFC 255 main event on November 21. Will God of War retain his belt?

Figueiredo began competing in MMA as a pro in 2012 and amassed an outstanding record of 19-1. The Brazilian was riding on an 11-fight winning streak before transitioning to the UFC in 2016. In the promotion, Deiveson beat 4 opponents in a row and suffered the first career loss in a bout against Jussier Formiga in 2019. Next year, Figueiredo faced Joseph Benavidez in a contest for the vacant UFC title and knocked him out, but failed to win the belt because he had missed weight. In a rematch held in July 2020, Deiveson submitted Benavidez and earned the title.

Perez started his professional career in 2011 and compiled a record of 24-5. The American won the vacant TPF flyweight title in 2015 but failed to defend it in a showdown against Adam Antolin. Alex signed a contract with the UFC after the victory over Kevin Gray at Dana White’s Contender Series 5 in 2017. In the promotion, Perez won 6 of 7 bouts and is currently ranked fourth at flyweight. Alex has never become a title contender before, however, he got bonuses for the best performance in the last contests against Jordan Espinosa and Jussier Formiga. Perez is going on a 3-fight winning streak. 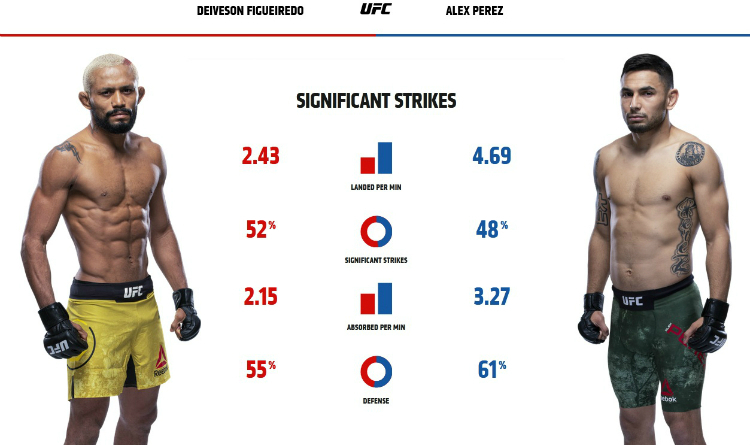 Alex performs 72% more takedowns and has a better defense. Deiveson, on the contrary, outnumbers his rival’s submission attempts nearly 2 to 1. 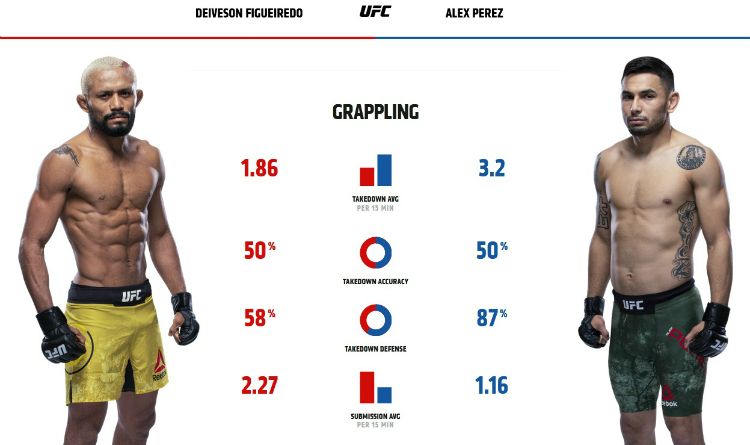 Deiveson earned a black belt in BJJ. Alex trains in wrestling and BJJ, but he has no ranks in the Brazilian Jiu-Jitsu. Therefore, Figueiredo brings the fight to the canvas less frequently and denies 29% fewer takedowns. However, Perez is not as dangerous on the mat because he rarely makes submission attempts and focuses on ground-and-pound.

The Brazilian coached in capoeira, while The American went in for boxing. Thus, their striking styles are different. Figueiredo throws more kicks, elbows and knees, Perez prioritizes punches. Alex has faster hands, but Deiveson is a more versatile striker.

Perez has an advantage in terms of the number of significant strikes landed. Nevertheless, Figueiredo throws more powerful shots: he gained 50% of victories by KO/TKO versus Alex’s 22%. Deiveson’s takedown defense is not flawless, but he has impressive grappling skills, which he successfully uses on the ground. Given these facts, Figueiredo has a better chance to be victorious. Perez suffered 60% of losses by submission, and the Brazilian gained 33% of victories by chokes or locks. Therefore, Deiveson will likely make his opponent tap in the first or second round, as he did in 2 of 3 last showdowns.