Figueiredo vs Moreno: will Brandon win the flyweight title at UFC 256? 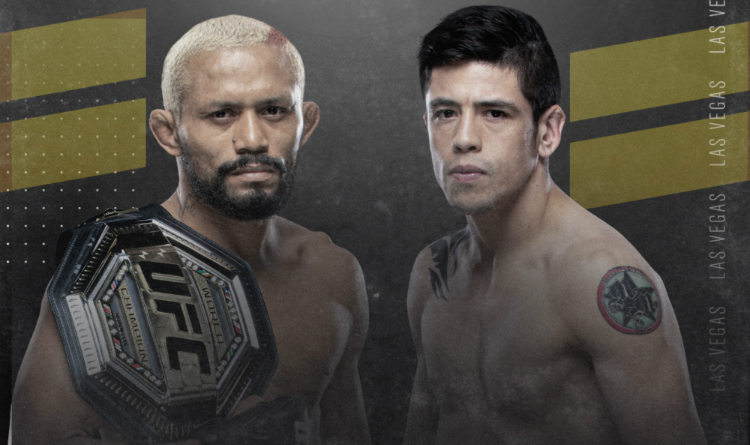 Figueiredo to defend the title against Moreno

Flyweight champion Deiveson Figueiredo will face Brandon Moreno in the UFC 256 main event on December 12 in Las Vegas. Does Moreno have a chance to win the belt?

Figueiredo started his professional MMA career in 2012. His record currently stands at 20-1. Daico had gained victory in 11 consecutive bouts before signing with the UFC in 2017. The Brazilian won 4 first contests in the promotion and suffered the only loss in a clash against Jussier Formiga last year. Deiveson got a title shot in 2020 upon defeating Alexandre Pantoja and Tim Elliott. He beat Joseph Benavidez but missed weight and failed to earn the belt. Nevertheless, Figueiredo submitted Benavidez in a rematch and became the flyweight champion. Daico defended the title in November 2020 in a bout against Alex Perez.

Moreno began competing in MMA as a pro in 2011 and compiled a record of 18-5-1. The Assassin Baby won the WFF flyweight title in 2014 and defended the belt thrice. He transitioned to the UFC in 2016. In the promotion, the Mexican beat 3 opponents in a row but then lost to Sergio Pettis and Alexandre Pantoja. He was cut from the UFC in 2018 and struck a deal with the LFA. Moreno knocked out Maikel Perez in his debut, earned the LFA title and returned to the UFC. The first bout after his comeback against Askar Askarov resulted in a draw. Subsequently, Moreno defeated Kai Kara-France, Jussier Formiga and Brandon Royval. He is ranked first at flyweight. 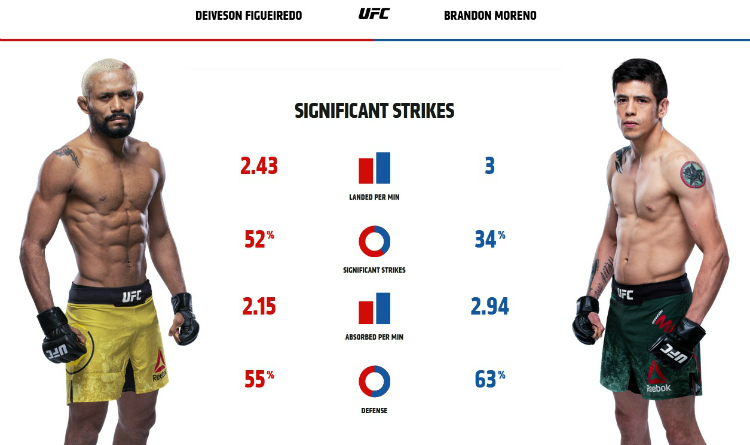 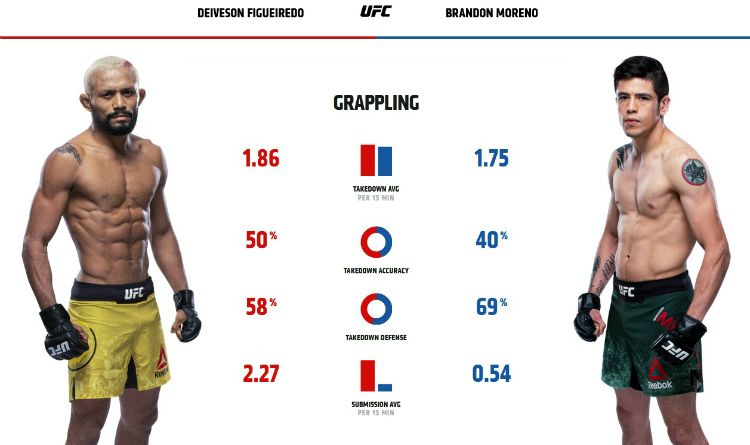 Both athletes have not trained in striking martial arts. However, Deiveson looks much crisper on the feet. He has more knockout power, better technique, uses a wider variety of shots and effectively mixes punches with devastating low-kicks. Brandon is less accurate, takes more blows and has great boxing skills but throws kicks rarely.

Figueiredo earned a black belt in BJJ, while Brandon got a brown one. Therefore, the Brazilian is a more virtuoso Jujutsu-Ka. Daico brings the fight to the canvas more often, threatens his opponents with chokes, and locks on the mat. Moreno, on the other hand, makes submission attempts less regularly because he bets on ground-and-pound.

Deiveson has an advantage in grappling and striking. Thus, he has a great chance to beat Moreno. The Mexican is an experienced BJJ artist with a solid takedown and submission defence. Therefore, the Brazilian might avoid wrestling exchanges. In this case, the bout will be a kickboxing match with Daico taking the lead.

Deiveson’s knockout rate is 45%, but Moreno has lost only by decision. Nevertheless, Daico put Benavidez to sleep in the second round, proving that he had enough gunpowder in his hands. Mindful of this factor, Figueiredo will likely beat Moreno by KO/TKO. Deiveson’s average fight time is 12:07; moreover, he defeated 4 last rivals in the first or second round. Thus, the contest is expected to be finished before the fourth heat.