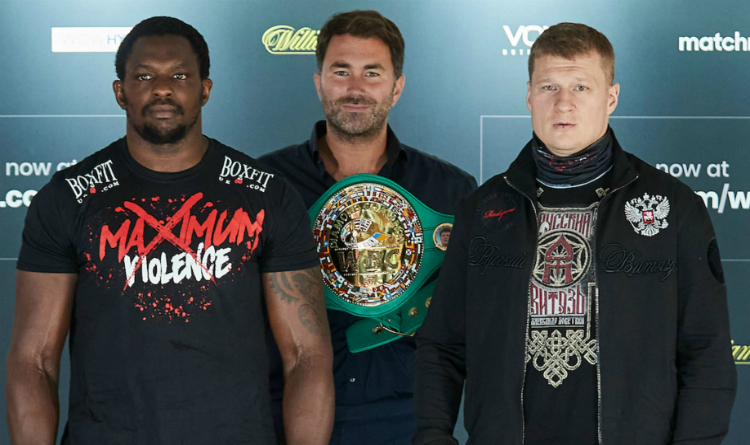 A heavyweight bout between Dillian Whyte and Alexander Povetkin was postponed until January after the Russian boxer had tested positive for coronavirus.

Alexander defeated Dillian by TKO in August 2020 and accepted an immediate rematch because this option was in the contract. Povetkin was supposed to defend WBC interim heavyweight title against Whyte on November 21 in Wembley. However, he was infected with COVID-19 and had to go into quarantine. Matchroom Boxing promoter Eddie Hearn hopes Povetkin will recover shortly and is looking forward to holding the contest in late January next year.

Speaking on Instagram, Hearn claimed that Derek Chisora wants to replace Alexander and face Whyte in the main event of the tournament. Chisora is eager to get back in the ring after dropping a unanimous decision to Oleksandr Usyk on October 31. Derek fought against Whyte twice but lost both clashes. However, Chisora is looking forward to making history as the fastest pay-per-view turnaround and has come up with a title for the upcoming event – “Lockdown lunacy”.

Apparently, Eddie refused to accept Derek’s offer. He suggested signing WBC champion Tyson Fury instead. Gypsy King is set to fight on December 5 but he does not have an opponent yet. Nevertheless, Tyson will unlikely agree to face Dillian on short notice. Former WBA Inter-Continental champion Michael Hunter has also expressed a desire to take on Whyte and save the event, saying that he can fight for free.