Crawford vs Brook: will Special K take the WBO title from Bud? 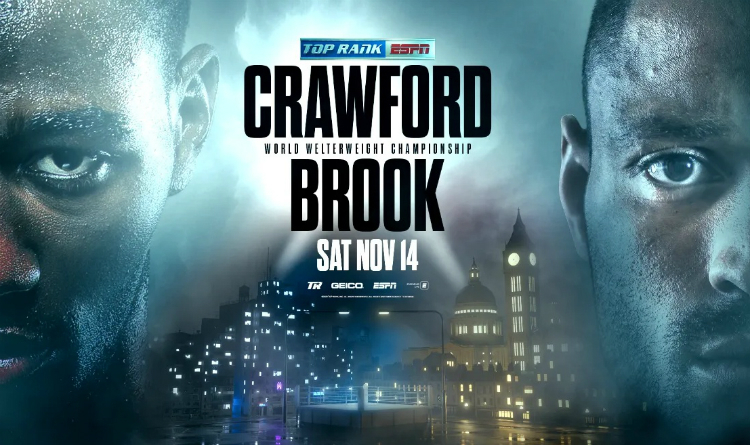 American boxer Terence Crawford will defend the WBO welterweight title in a bout against Englishman Kell Brook on November 14. Will Special K take the belt from Bud?

Crawford began his professional career in 2008 and compiled a whopping record of 36-0. In the period of 2013-2015, Bud won 4 titles: the WBO–NABO at lightweight, the WBO at lightweight and welterweight and The Ring at lightweight. He retained the belts 3 times and earned the WBA and IBF light welterweight titles in 2017. Terence moved up to the 147-pound division in 2018, beat Jeff Horn by TKO and acquired the WBO welterweight belt. He defended WBO gold thrice and was ranked as the world’s best active welterweight by BoxRec.

Brook debuted as a pro in 2004. His record currently stands at 39-2. In 2008-2012, Special K won 4 belts at welterweight: the British, WBO Inter-Continental, WBA Inter-Continental and IBF International. In 2014, Kell beat Shawn Porter and became the IBF welterweight champion. He defended the belt thrice and faced Gennady Golovkin in a contest for the WBC, IBF, and IBO middleweight titles. Brook was defeated by TKO and suffered the first career loss. In the next showdown, Errol Spence Jr. knocked out Kell and took the IBF belt from him. However, Special K used a chance to redeem himself: he beat 3 last opponents and won the WBC Silver light-middleweight and WBO Inter-Continental light-middleweight titles. BoxRec ranks Brook third at light-middleweight.

Fighters are evenly matched in terms of punching power and an ability to take blows. But Crawford has more knockout power. 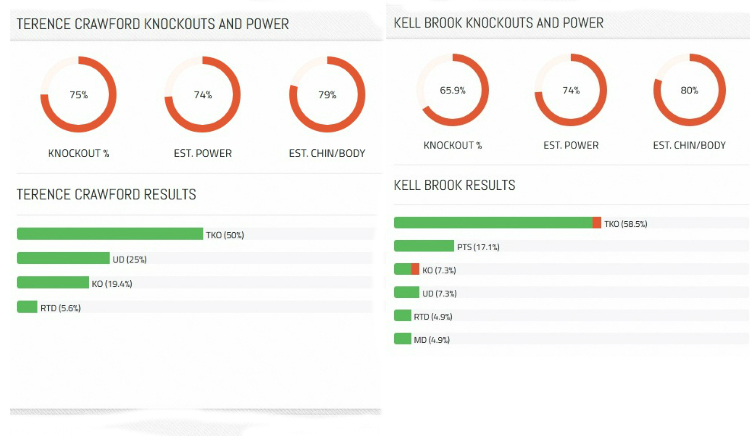 In his last bout against Egidijus Kavaliauskas, Terence landed 14 total punches per round, 11.6 of them were significant. In a bout against Mark DeLuca, Kell hit the target 15 times per round, 11.7 shots were powerful ones. However, Crawford was more accurate: he landed 33.5% of total strikes thrown (versus Kell’s 24.8%) and 47.9% of power punches (versus Kell’s 38%). Nevertheless, Brook’s overall defense was better: he absorbed only 24.8% of total strikes (versus Crawford’s 30.2%), but took more power shots – 34.7% (versus Terence’s 33.5%).

Terence’s strength lies in speed and power. He has outstanding defensive skills and masterfully switches stances. Brook is slower, less sharp and lacks knockout power. He had troubles in fights against faster opponents – Golovkin and Spence Jr. Gennady outnumbered Kell’s shots 1.5 to 1 and landed 44.2% of punches. Crawford leaves no chances to slow-going rivals. For instance, in a contest against Amir Khan he outlanded his opponent’s strikes 2 to 1 and absorbed just 24.2% of punches.

Given these factors, Crawford is likely to be victorious. He has an impressive 75% finish rate and has beaten 7 last rivals before the time limit. Brook, on the other hand, lost on both occasions by KO/TKO. Therefore, Terence is poised to win by knockout. Bud’s average winning round is fifth, however 3 of 4 his last contests reached the ninth heat. Thus, the fight is expected to go on more than 7 rounds.