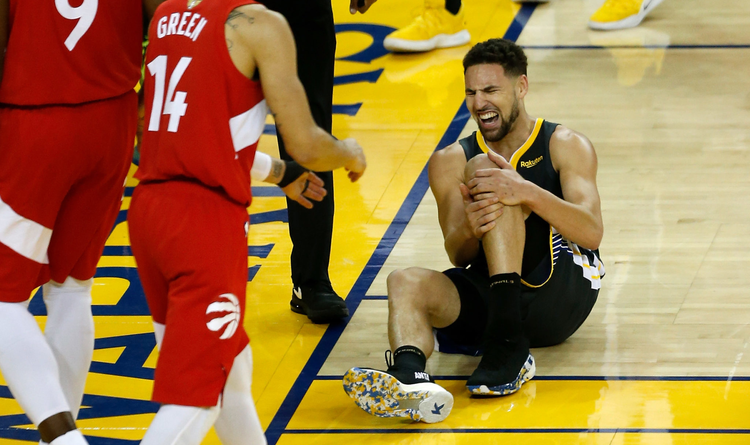 Klay Thompson is a professional Shooting Guard, playing for the NBA’s Golden State Warriors. The superstar was recently injured during workouts in Southern California. Losing Thompson, who had to lead the team to the NBA Championship together with Steph Curry, will greatly affect the Warriors’ chances to win during the upcoming season.

Thompson will most likely miss the entire 2020-21 NBA season

The Golden State Warriors were supposed to celebrate selecting James Wiseman with their N0. 2 overall pick during the 2020 NBA Draft on November 18, but the Draft day was darkened by Klay Thompson being seriously traumatized during workouts in Southern California.

“Klay Thompson suffered an injury during a workout this afternoon in Southern California. And I’m told the fear is that it’s a heel injury. But for Klay Thompson, he went to the sidelines, I’m told. And he was getting worked on in that heel area. After that, he limped off and didn’t put any pressure on his lower leg and he exited the gym. He will get a test in the near future, an MRI to really reveal the significance of the injury. But this impacts the Warriors in a lot of ways. Klay Thompson is their star.”

Thompson, who missed the previous NBA season after an ACL tear, is very unlikely to return during the upcoming season. The tests confirmed that the Warriors’ superstar has suffered an Achilles tear. Such kind of trauma is expected to take him out of the game for at least several months, maybe even for the entire season. Even if Thompson will recover in incredibly short terms, the Warriors might not let him play right after two serious injuries in a row.

As every basketball fan wishes Klay Thompson to get well and recover as soon as possible, there is a big question about the Golden State Warriors’ possibilities during the 2020-21 NBA season. The Warriors were expected to become the ones to take the title from the Lakers, with both Curry and Thompson recovered and playing shoulder to shoulder the team seems to be unstoppable. As the team now has their second superstar Steph Curry and newly signed James Wiseman to support him on the floor, the Golden State Warriors might still have a chance to succeed during the forthcoming season, starting on December 22.