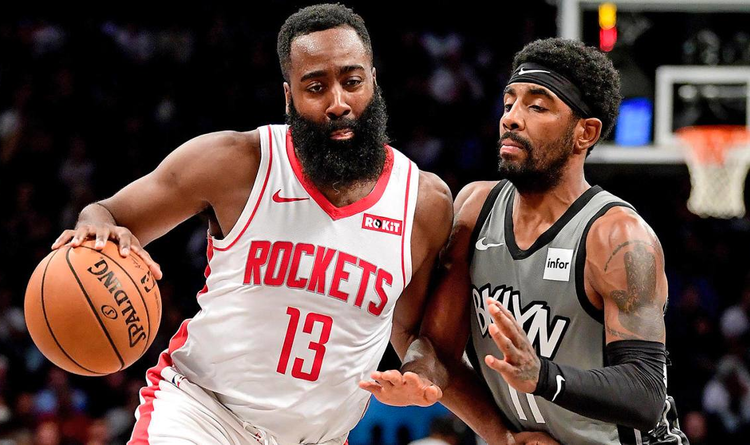 November 01, 2019: Kyrie Irving (11) of the Brooklyn Nets tries to block James Harden (13) of the Houston Rockets at Barclays Center

James Harden, Kevin Durant, and Kyrie Irving, who are believed to be the strongest NBA trio, are trying to play together. Even though some experts do not believe that three top shooters can play for the same team, the Brooklyn Nets have a very high chance of winning the 2020-21 NBA season.

The Brooklyn Nets are ready to win the title at any cost. Since they now have three top NBA shooters, the team is incredibly close to the Finals. Kevin Durant and Kyrie Irving, who form a very successful duo and can lead the team to victory, are now supported by James Harden. Even though ‘the Beard’ is a dominant star player with great offensive skills, he can also help the Nets by averaging 10-14 assists per game. Since Harden is no longer the only superstar on the team, he has a great chance to change his role. The player is happy to try something new and support the team:

“I was in a role for 8 years controlling the ball, dominating the ball. Now, it’s a different experience for me, but it’s still great. It’s still basketball at the end of the day. I’m lucky to be able to do more than just one thing on the basketball court. It’s fun.”

Since James Harden and Kevin Durant are now real teammates, they help each other set new NBA records. Kevin Durant managed to score more than 400 points in his first 13 matches with the Brooklyn Nets. It is the best result in the twenty-first century and the second-best result in NBA history. At the same time, James Harden is the first player in NBA history to score a 30-point, 10-assist double-double in his first two games.

Even though Steve Nash is just learning how to be a head coach, he did a great job combining three offensive talents. That is why Harden, Durant, and Irving don’t fight for the ball and support each other on the floor.

The Brooklyn Nets are becoming stronger and much more dangerous. Since Harden, Durant, and Irving are learning how to play together, Steve Nash can use his three superstar players to reach the Finals and win the title this year.