Is it possible to compare LeBron and Jordan? 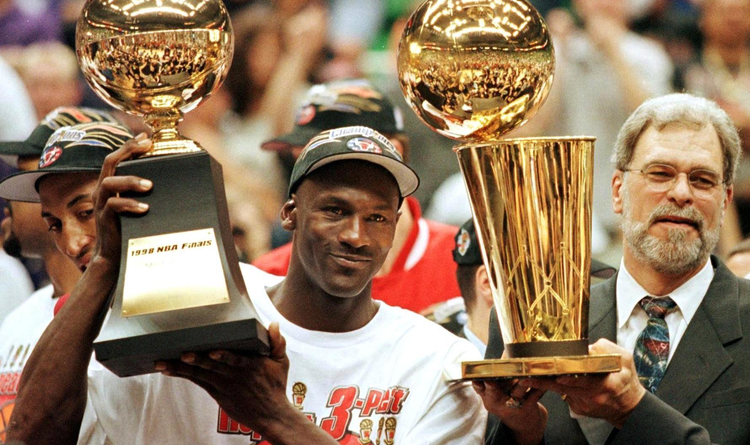 LeBron James and Michael Jordan often become the subjects of controversy between fans and experts discussing who should be called the GOAT (Greatest Of All Times). Jordan is admired for being a unique example of the old school basketball while James is extremely popular with younger fans. Since two legendary players never came face to face in an NBA game (Jordan’s last game took place two months before LeBron James came to the NBA), the only way to decide who is the best is to compare the statistics and analyse their careers from different angles. Is it possible to say that LeBron, who was idolizing MJ at the beginning of his professional basketball career, now better than the legendary Air Jordan?

The NBA is quickly changing along with the modern world and it is one of the reasons it’s difficult to compare two players, who became stars during different time periods. Michael Jordan’s best years were mostly the 90’s, his peak lasted for nearly 10 years. LeBron James joined the NBA in 2003 and has been at the peak of his career for 16 years. Although LeBron’s career is not over and he is still surprising everyone with impressive skills improvement, there are many people who do not believe that he can ever surpass Michael Jordan. Professional basketball player, two-time FIBA European Cup champion, member of the Hall of Fame Dino Radja told about his opinion about the GOAT argument:

“When the comparisons between LeBron and Jordan start, I vomit. My son assures me that LeBron is better but for me, it’s not a discussion. If he had played twenty years ago, LeBron wouldn’t have been able to do even half of this. Today, when LeBron enters the paint, everyone moves away from him, but Jordan was getting beaten like no one and he still dominated. In front of LeBron were Kobe Bryant and some others. I respect LeBron but Kobe was better.”

If speaking about legacy, Michael Jordan becomes nearly untouchable. He became an idol for those, who later became world-famous players. He led basketball to global popularity, changing the way athletes played, dressed and exercised. Even though Jordan is no longer playing, he still remains an example for many young players around the world. His name is one of the first that comes to mind when someone says basketball. Michael Jordan’s legacy is another reason it is difficult to say that someone is better than His Airness, but to compare LeBron James and MJ we need to stick with those criteria that show skills and accomplishments, not just legacy. For example, both players’ careers analysis.

Joining the NBA in 1984, Jordan was selected with the third overall pick in the NBA Draft and signed with the Chicago Bulls. Even though the first season was not Jordan’s best one, he was quickly noticed by basketball experts and fellow players. MJ signed a contract with Nike, making the Air Jordan line extremely popular. Jordan got his first league Most Valuable Player Award during the 1987-88 NBA season. During the 1988-89 season, the Pistons had to use “Jordan Rules” as their only chance to win the Finals with Jordan playing against them. Michael Jordan won his second MVP and first NBA Finals MVP award during 1990-91 season. That was the beginning of Jordan’s peak.  In total, he won 6 NBA Championships, earned a total of 14 MVP awards, was selected to 14 All-Star games, won 10 scoring titles, became a member of the Hall of Fame and won numerous other awards while playing with the Bulls.

LeBron was first noticed being a high school basketball player with unique skills, size, and strength. He dropped out of college to join the NBA and was immediately picked in the 2003 NBA Draft by the Cleveland Cavaliers. During his first season, LeBron became the youngest player to win the NBA Rookie of the Year Award. During several seasons with the Cavaliers, James got a lot of attention because of his talent and incredibly high average point scoring. After becoming a free agent and signing with the Miami Heat in 2010, LeBron finally got his first title winning two NBA Finals in a row(2011-12, 2012-13). After his last 2013-14 season with the Heat, the star player returned to the Cleveland Cavaliers, led them to win the 2015-16 Finals, and became Finals MVP awardee for one more time. In 2018 LeBron James made a decision to join the LA Lakers and won with them the latest 2019-20 NBA Finals, where James was voted Finals MVP.

All in all, it is difficult to compare the two basketball talents that became famous in different time periods. Without a doubt, both players are insanely talented and unique in their own way, Jordan will be an idol for old school basketball fans and LeBron is the next generation, he is writing new basketball history.