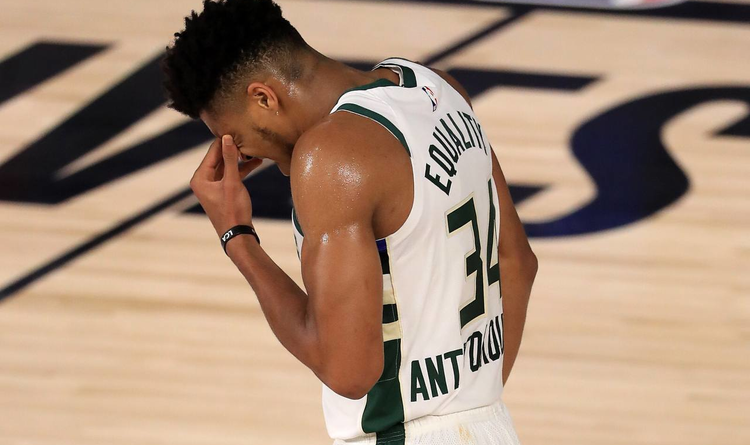 August 31, 2020: Giannis Antetokounmpo (34) of the Milwaukee Bucks rests after playing against the Miami Heat at ESPN Wide World Of Sports Complex

The 2020-21 NBA season is full of surprises. Giannis Antetokounmpo, who managed to win two MVP awards in a row, has a major free throw problem. Even though the superstar is believed to be one of the best and the most athletic NBA players, his shooting issues are not getting better.

It is very difficult to disagree with the fact that Giannis Antetokounmpo is one of the most popular and unique NBA players. Two MVP awards in a row and the largest contract in NBA history($228 million) are just a few of the accomplishments that make Giannis a true superstar. Antetokounmpo was even expected to get his third consecutive MVP title this year, but the athlete seems to have a major free throw problem. He is currently at the lowest point, shooting only 57.5 percent and surprising everyone with only one successful free throw from the line out of ten attempts. Since it is the worst result in Milwaukee Bucks history, Giannis has to work harder to prove that his $228 million contract is not just a waste of money.

According to Giannis Antetokounmpo’s interview, the two-time NBA MVP is going to improve his shooting as quickly as possible:

“It’s simple. Just go back. Shoot more. Focus on your technique. Take it step by step. Just shoot more. That’s it. The more you shoot, the more you work on it, the better you get. There’s no secret in that.”

While ‘The Greek Freak’ is one of the biggest and physically strongest NBA players, some experts believe that Giannis might be the next Shaq and expect him to have the same shooting issues. Big and athletic players are very effective offensive performers but they often need another superstar player to support them on the floor. Maybe Giannis Antetokounmpo needs to find his Kobe Bryant to lead the Milwaukee Bucks to victory.

Working hard and improving his shooting skills might change Giannis Antetokounmpo’s future. This season will show if the two-time MVP is going to become even better.